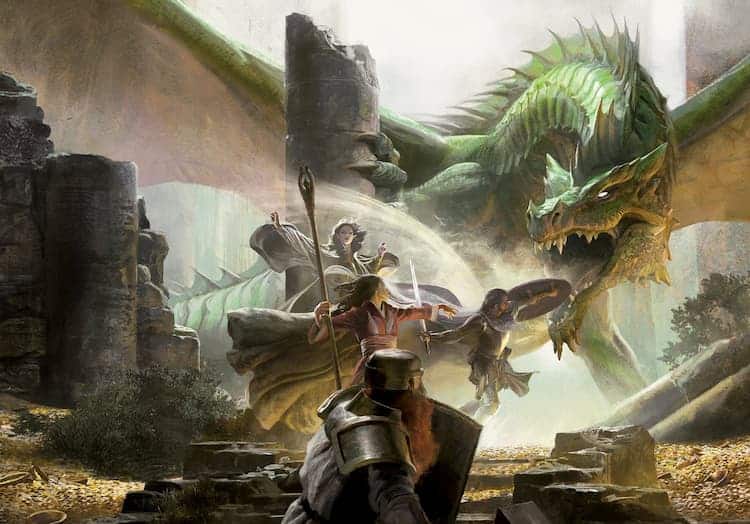 If ever there were a time to start playing Dungeons and Dragons, it’s right now. The table-top role-playing game has had a massive resurgence in recent years. As a weekly player myself, I want to share how it became a household name again, for good reason this time, and all of the ways you can and should get involved.

D&D hasn’t always been the absolute powerhouse that it is now. It’s had its ups and downs and controversies, but it always comes back fighting. In the early days of D&D, the game was accused of promoting Satan worship, witchcraft, and even murder. It caused such moral panic at the time that players of the game were ostracized. It’s ridiculous to think that all of this resulted from a harmless table-top RPG. Coming out of such a turbulent start and continuing on to become what it is today is a testament to the creators and players who kept the game going regardless of what people thought.

While all of us have probably been introduced to D&D in very different ways, there are two main bits of pop culture that come to mind when I think about D&D becoming a household name.

The first thing that comes to mind is Stranger Things, which came to Netflix in 2016. The very first episode introduced us to Mike, Will, Dustin, and Lucas by showing them playing D&D together. As their main frame of reference for monsters, the creatures from the Upside Down, the Demogorgon, the mind flayer, and Vecna are named after D&D monsters. The game and the negative treatment of its player plays a huge part in the most recent series of Stranger Things, but since it still hasn’t been out very long, I won’t include any spoilers here, just in case.

The boys playing D&D in Mike’s basement pops up quite a few times across all four series of the show, and be honest with yourself, we know you’re incredibly jealous of Will the Wise’s wizard costume. I know I am! The series had such an influence on D&D that you can even buy your own Stranger Things themed Starter Set that includes a mini of the Demogorgon. It includes everything you need to run your own version of Mike’s D&D campaign!

Even before Stranger Things came to our screens, another big hitter was coming into its own on Twitch. Critical Role, started streaming via Geek and Sundry in 2015 and was originally a collection of voice actors that started streaming their home game part-way through their adventure. For the most part, the games include Dungeon Master Matt Mercer and players Laura Bailey, Travis Willingham, Marisha Ray, Ashley Johnson, Sam Riegel, Liam O’Brien, and Taliesin Jaffe. Critical Role has become a real phenomenon and has grown from a group of voice actors streaming their home D&D game to having its own company. They are now onto their third campaign, they’re one of the highest earners on Twitch, have their own Amazon animated TV series based on their first campaign, and are still growing and spreading the good word of D&D to the masses.

Their influence on D&D can’t be denied, and they’ve introduced the game to so many new fans and showed how truly immersive and exciting a campaign can be. They’ve even paired with Wizards of the Coast and WizKids to create official Critical Role inspired books and miniatures so that you can bring their creations into your own campaigns. They’ve also led the way for lots of other creators to bring their D&D campaigns to the internet in one way or another. There are a bunch of D&D podcasts now, including Dungeons and Daddies and Not Another D&D Podcast. Similar to Critical Role, there are a lot of D&D games, also known as Actual Plays, that are streamed online now, which includes College Humor’s Dimension 20. Dimension 20 is usually helmed by Dungeon Master Brennan Lee Mulligan, who Critical Role fans may recognise as the Dungeon Master of Critical Role’s recent Calamity miniseries.

If unfathomable amounts of internet content, a Netflix series, and an Amazon animated series weren’t enough D&D content for you, it was also recently unveiled that the long-awaited D&D movie, Dungeon & Dragons: Honor Among Thieves, is finally coming to theaters in 2023. The trailer includes a long list of our favourite D&D creatures and the movie boasts a seriously impressive cast that has both Chris Pine and Hugh Grant. Based on what we know so far, it looks like it’s going to be an action-filled comedy which, let’s face it, is basically everything that a home campaign becomes.

Speaking of which, if you are interested in D&D via any of these means but have yet to play it yourself, I honestly can’t encourage you enough. I’ve played for around three years and still don’t get tired of it. I’m lucky to have a group of friends that get together every weekend to play, and while I’m yet to properly step into the role of Dungeon Master, I absolutely love being a player. I’ve found a love of gnomes, animal companions, and being the party spellcaster who hides at the back.

Since D&D has become so huge now, you probably don’t have to go far to find a group of people willing to commit to a campaign. Local game shops are putting together their own sessions; schools, colleges, and universities are starting D&D societies; and with websites like Roll20 available, even groups of strangers on the internet can get together for a game. While D&D is at its peak, 5th edition D&D is likely becoming the most played table-top RPG ever, and we’re expecting the next edition in 2024. There’s never been a time like right now to get involved.