House of the Dragon Episode 4 - Recap of the Chaotic Ladder 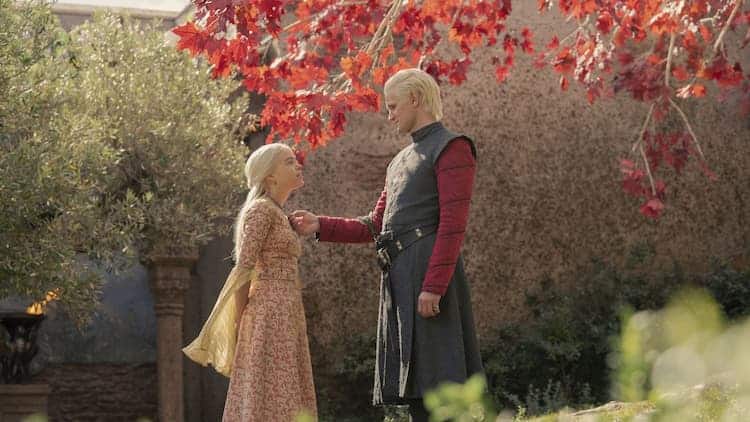 House of the Dragon is chugging along in its inaugural season as Episode 4 aired Sunday, bringing us chaos and more cringe than we were prepared for! Following the Battle of the Stepstones in Episode 3, Episode 4 brings us savvy chess piece moves, awkward familial intimacy (yep), powerful marriage promises and suggestions, and so much more.

We’re going to get into the cringe of this episode, but first, don't miss our new show, "Decoding Dragons," where my talented co-host Liza Phoenix and I break down all things House of the Dragon (also available on YouTube and podcast format)! We dive deep into lore, symbolism, easter eggs, and more of Westeros and Game of Thrones. If you don’t have 20 minutes to listen or watch, but you do have a few minutes to read, continue forth, my Lords and Ladies. If you don’t want to get burned by spoilers, I suggest watching the fourth episode before continuing on!

Ok, let’s go ahead and get into what happened in Episode 4, "King of the Narrow Sea."

At this point in the series, we know the showrunners are putting the pieces into place to get to the ultimate point: the Dance of the Dragons, or the Targaryen war for succession. This means that every episode will have a time jump until we get to the older version of the characters. For Episode 4, we are looking at 1 year after the events of Episode 3, which was 3 years after the events of Episode 2. We start off with Rhaenyra and her Kingsguard Ser Criston Cole, who have been sent on a tour of the realm to be greeted by all eligible bachelors. We get a peek into the throne room of Storm’s End, which is a castle we’ve never seen the inside of in the Game of Thrones universe! Rhaenyra gets tired of the circus and cuts her tour 2 months short, heading home to King’s Landing.

There, we visit a High Council meeting that gives us the first chess move of many in this episode. And, once again, we hear Corlys Valryon's name.  This time, we learn that he is planning to wed his daughter Laena (the young girl that King Viserys turned down for Alicent) to a noble in Braavos, one of the Free Cities. More on this later.

After that, we are greeted by the second chess move by way of Daemon. Now dubbed the King of the Narrow Sea following his victory over the Triarchy, everyone watches Daemon with trepidation as he swaggers into the Red Keep for the first time since his banishment in Episode 1. Daemon is graciously greeted by King Viserys who expresses his gratitude for the victory for the Crown. Daemon places his own new crown at his brother’s feet as a sign of… respect?

Since Rhaenyra cut her tour short, she is in King’s Landing for Daemon’s return and the jovial festivities that follow. She is greeted solemnly by her father, King Viserys, who is frustrated that she returned home early. In contrast, Alicent and Rhaenyra share a sweet moment that shows a return to their old friendship, which is another sign that time has passed. Their stories begin to move in parallel yet opposite directions as Rhaenyra is coming to terms with her duty as heir and as a female.

Easter eggs: You may remember Braavos from the original GoT series as the city where Arya goes to join the Faceless Men. You'll also probably recognize Storm’s End as the home of the Baratheons, which is why we never saw the inside in the original series because the living Baratheons were scattered elsewhere: Robert Baratheon was king in King’s Landing, Stannis Baratheon had taken Dragonstone, and Renly Baratheon was married to Margaery Tyrell in Highgarden. Also, in the scene with Alicent and Rhaenyra, Alicent is wearing a red and black dress, the Targaryen colors, which will be an important note later in the series.

Let’s start the cringe with the Flea Bottom Bar Crawl

I wonder how it feels to be a Targaryen, or even to live in King’s Landing at the time of Targaryens, and to be the butt of all jokes in regards to incest. (Drew, any comments?) Ok, all jokes aside, the wheel that needs to break in this series is the incestual wheel. Daemon takes Rhaenyra on a jaunt to Flea Bottom to show her parts of the city and culture that she is unfamiliar with. He also is trying to show her that the opinion of the "small people" should matter when she is Queen. They both are in superhero costumes, meaning Daemon has a hood and Rhaenyra has a hat to hide their identifying hair. They explore the streets of Flea Bottom, catching parts of a play put on by the commoners, stealing some food, and finding themselves in a brothel.

Daemon slyly removes Rhaenyra’s hat so she is now recognizable (our third chess move of the episode) as they make their way through the brothel halls. After participating in some hot and heavy make out sessions… as uncle and niece, Daemon leaves her high and… not so dry. His motive seems to have been accomplished, but his discontent leaves open-ended questions. He storms out before things escalate, causing Rhaenyra to flee back to the Red Keep. This is followed by a domino effect of morally gray decisions. She returns to her room where Ser Criston Cole is dutifully guarding her door and enters to check on her. She goads him into engaging in adult activities, which puts Criston’s position at risk as a Kingsguard.Easter eggs: The play that Daemon and Rhaenyra watch in Flea Bottom is a callback to the one Arya watched in Braavos about her own family’s demise for the Iron Throne.

Otto Hightower, Alicent’s father and Hand of the King, has the unpleasant job of telling King Viserys the rumors that are circulating about his daughter's extracurricular activities. Since Rhaenyra’s hair was unveiled, she was spotted by a few people. But, most importantly, this came from the whispering children in the employ of Mysaria, a.k.a. the White Worm. Recall that she was Daemon’s mistress in episodes 1 and 2. This causes uncomfortable and uncertain conversations between Rhaenyra and Alicent, Rhaenyra and Viserys, Viserys and Daemon, and Viserys and Otto. Whew, politics! Alicent confronts Rhaenyra about what she overheard her father telling the king, and she is distraught at the idea. Rhaenyra lies and says nothing happened, and more seeds of distrust are sown. The king has a very personal conversation of threats with Daemon after getting the Kingsguard to haul his hungover ass into the throne room. Daemon then offers his hand in marriage to Rhaenyra, but the King takes it for a vie for the throne instead of Rhaenyra's happiness, then banishes Daemon once again. The brotherly love from before is gone.

The king then has a conversation with Rhaenyra to determine if these rumors hold any truth. Remember what we just learned about Corlys proposing to wed his daughter to Braavos? King Viserys finds a way to put a bandage on his own political mistake and commands that Rhaenyra wed Laenor, Corlys’ son. In case you're wondering, that's the person we saw riding the dragon Seasmoke in the last episode. This is chess move 4.

Viserys then shows Rhaenyra the dagger he has been heating in coals. Rhaenyra reads an inscription that has been etched into the blade, reading:

"From my blood comes the prince that was promised. And his should be the song of Ice and Fire."

Chills. Instant chills. Every time. Whether you agree with how GoT Season 8 ended or not, the lore and excitement is still there! What this means is that the prophecy was handed down to each Targaryen king and generation, knowing that when the Long Winter came, it would be Azhor Ahai, or the prince (or princess) who was promised, of Targaryen blood who unites the realm and beats the White Walkers. Shew.

Easter eggs: If you recall from what we learned in GoT, there is no direct translation from High Valyrian for the word that reads as prince or princess. It is the same word. Therefore, the prophecy doesn't reveal a gender identity. Even more excitement! Also, Mysaria is a call back to Varys in the original series who was the Master of Whispers for a couple of monarchs, and aiding them in gathering information they otherwise would not be privy to. As far as the dagger is concerned, it is the very same dagger from Season 1 of GoT used by the catspaw when he attempted to assassinate Bran Stark in his bed.

Ok, that sounds dramatic, but in the end of the episode, Rhaenyra only agrees to marry Laenor if the king does something about the meddling hand. Chess move 5. Therefore, King Viserys fires his hand, leaving strained bridges between his wife and his High Council. We do see the king’s declining health in this episode, which makes these stressful conversations more impactful when seeing how much distress he is physically under.

The last scene of the episode is Rhaenyra receiving a "moon tea" from the Maesters. This is essentially to be consumed to rid her body of something she may not want to have in there at the moment. In modern terms, it’s a medieval morning-after pill, as in it's probably not legal in places like Texas and West Virginia. We don’t see her drink it, though, which leaves it up to the viewer to guess whether or not she will be pregnant next episode!

This episode was pure CHAOS, and we are all here for it. There may not have been a lot of battle or gruesome scenes, but the pacing of the show is allowing them to set things up beautifully for when we get to the ultimate storyline of the show. Have you been watching? What are your thoughts? Don’t forget to listen to or watch Decoding Dragons and participate in the audience questions!

Naginta practitioner and instructor Charlotte looks at how the weapon itself and its use are depicted in video games. Which games are on point? Which ones are sorely lacking?
by Charlotte Merritt | April 5, 2022 | GamesLifestyleReviews 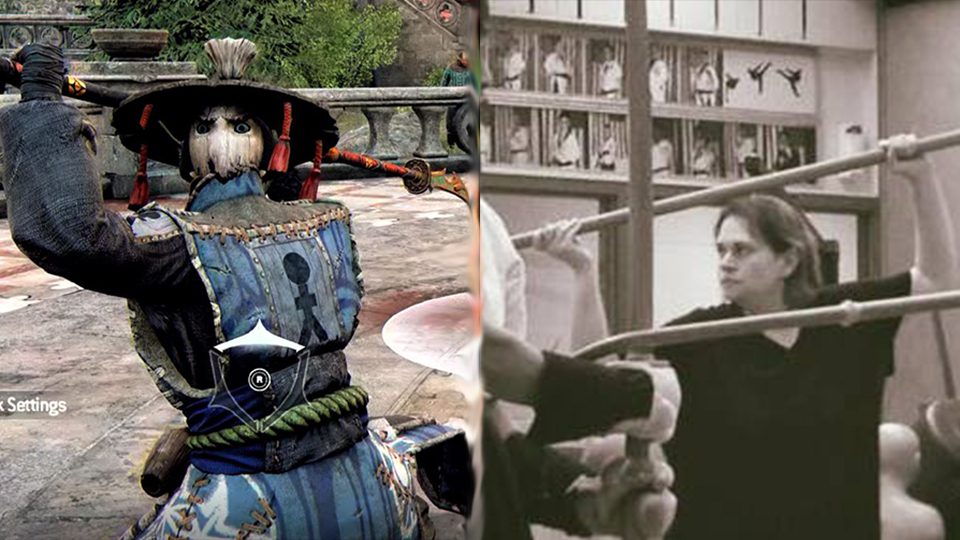 FromSoftware's games are notoriously difficult, and Elden Ring is no different. In fact, this game boasts one of the hardest bosses in the developer's history! Liza and Erika team up to tackle their favorite gaming question: to cheese, or not to cheese?
by Lizabeth Phoenix | July 8, 2022 | GamesPop CultureReviews 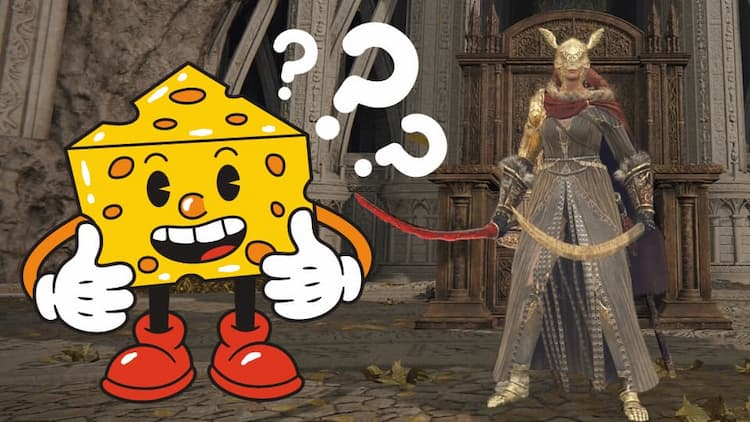