I wholeheartedly believe that you are set for life when you have a good friend by your side. They're someone who will be there for you no matter what happens and, of course, you will do the same for them. Without that, life is a bit harder, a bit greyer.

All my life, I've been looking for the friendship that Andy and Red have in The Shawshank Redemption, or the one that builds between John Coffey and Paul Edgecomb in The Green Mile. I wrote my dissertation about how the camaraderie between soldiers in World War II meant a life-long friendship. Also, in my article back in January, I talked about the relationship of the Winchester brothers from Supernatural. 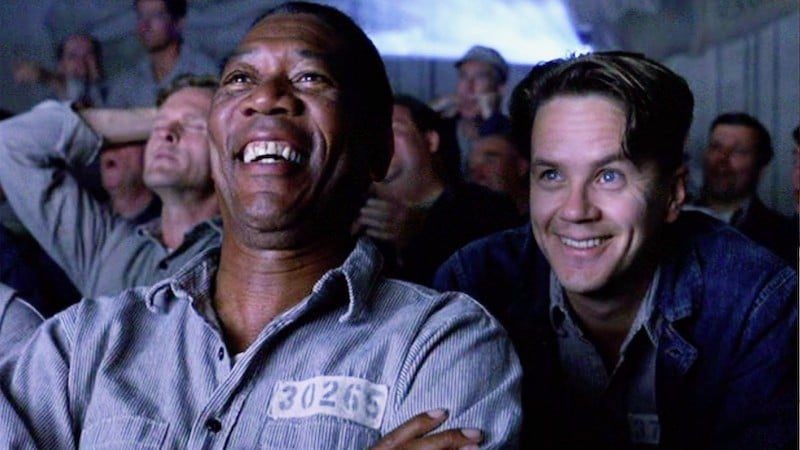 Even though I praised all of these friendships, I was never able to build one for myself. I do believe that women have a harder time finding and preserving friendships like men have with each other. I don't know what the main reason is, but there are definitely fewer examples of great friendships between women in my close proximity and in entertainment media as well.

Personally, I've always struggled with finding meaningful friendships, making many mistakes on the way, and regretting a ton of decisions. Even after the lift I got from Supernatural, life seemed to get darker again in 2010-11. The only thing that kept me going was the announcement of Captain America: The First Avenger movie, with Chris Evans being the lead.

Every girl has that one celebrity crush who lasts a lifetime. Well, for me, that's definitely Chris Evans. I've been watching his movies since I was 11 years old (remember Not Another Teen Movie?), and I loved seeing how he became more and more successful, rightfully so. So I held on until Captain America: The First Avenger arrived in cinemas, and it was the greatest decision of my life. 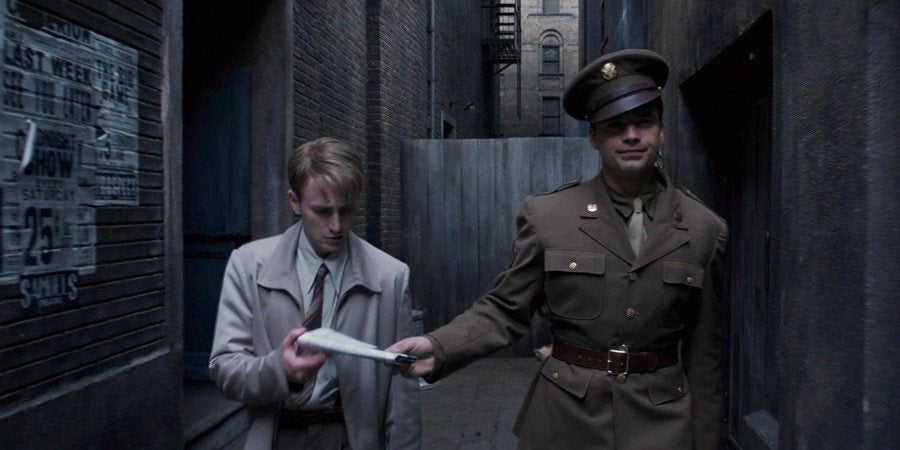 This movie saved me from drowning during that low point, and it managed to give me another friendship I can look up to. I loved how Bucky Barnes looked after Steve Rogers at the beginning: it wasn't because he had to, but because he truly did care about him. Considering that Bucky only has about 10 minutes of screen time, it's amazing how well they established the friendship between Steve and Bucky.

That story actually worked so well that when it was carried over to Captain America: The Winter Soldier 3 years later, it was completely believable: from the moment Steve visits the Smithsonian Museum and sees Bucky again, to the point where he discovers that the Winter Soldier IS Bucky, right to the end where he refuses to fight his best friend. This was the movie that gave us this line, which meant so much to me:

"I'm with you till the end of the line."

That quote became one of the most permanent parts of my life, and it inspired me to mark that significant moment with a tattoo. 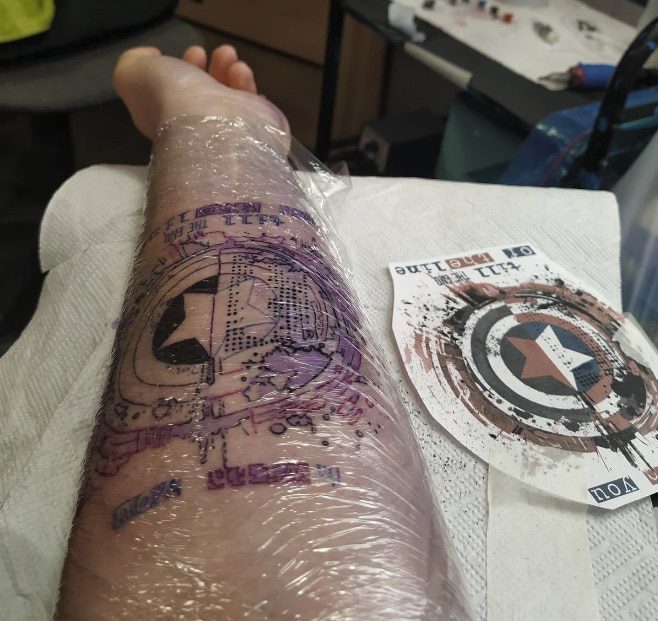 I wanted to show the world how much Steve and Bucky's friendship meant to me, how it helped me since the first movie came out. I am very picky with my tattoos (as you should be too!). I needed the right artist who does quality work regardless of the cost, and I needed it to MEAN something. Without that there's no point (says the girl who has a small star and a heart tattooed on her hand because her friend was bored). 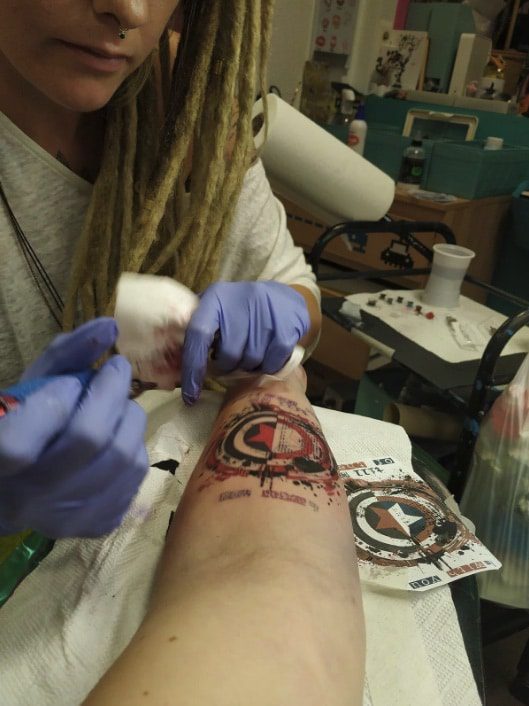 It took me exactly three years to find an amazing Hungarian tattoo artist (Instagram: @dioszegitattoo) and to decide on the exact design. At first, I wanted Steve and Bucky facing away from each other. However, no matter how much I adore Chris and Sebastian, portrait tattoos were always a big no for me unless they are animal ones. Then my tattoo artist designed the perfect piece, fusing together Cap's shield with Bucky's red star along with that meaningful line from the MCU surrounding it. She did an amazing job and gave me my most precious tattoo out of all the ones I have.

In Captain America: Civil War, Steve fought for Bucky. In Avengers: Infinity War he lost him again, and at the end of Avengers: Endgame, Bucky was the only one Steve trusted to share his plans with.

Steve's gone. It hit both of Steve's dear friends really hard: Sam Wilson and Bucky. But they had to accept it, and it was time for me to accept it, too. Bucky's struggle, through the absolutely gorgeous performance of Sebastian Stan, showed so well what that loss meant for him and for us as well. His best friend was gone. As he says it himself when speaking to Sam before he reclaimed the shield:

"It's just that shield's the closest thing I've got left to a family, so when you retired it; it made me feel like I had nothing left." 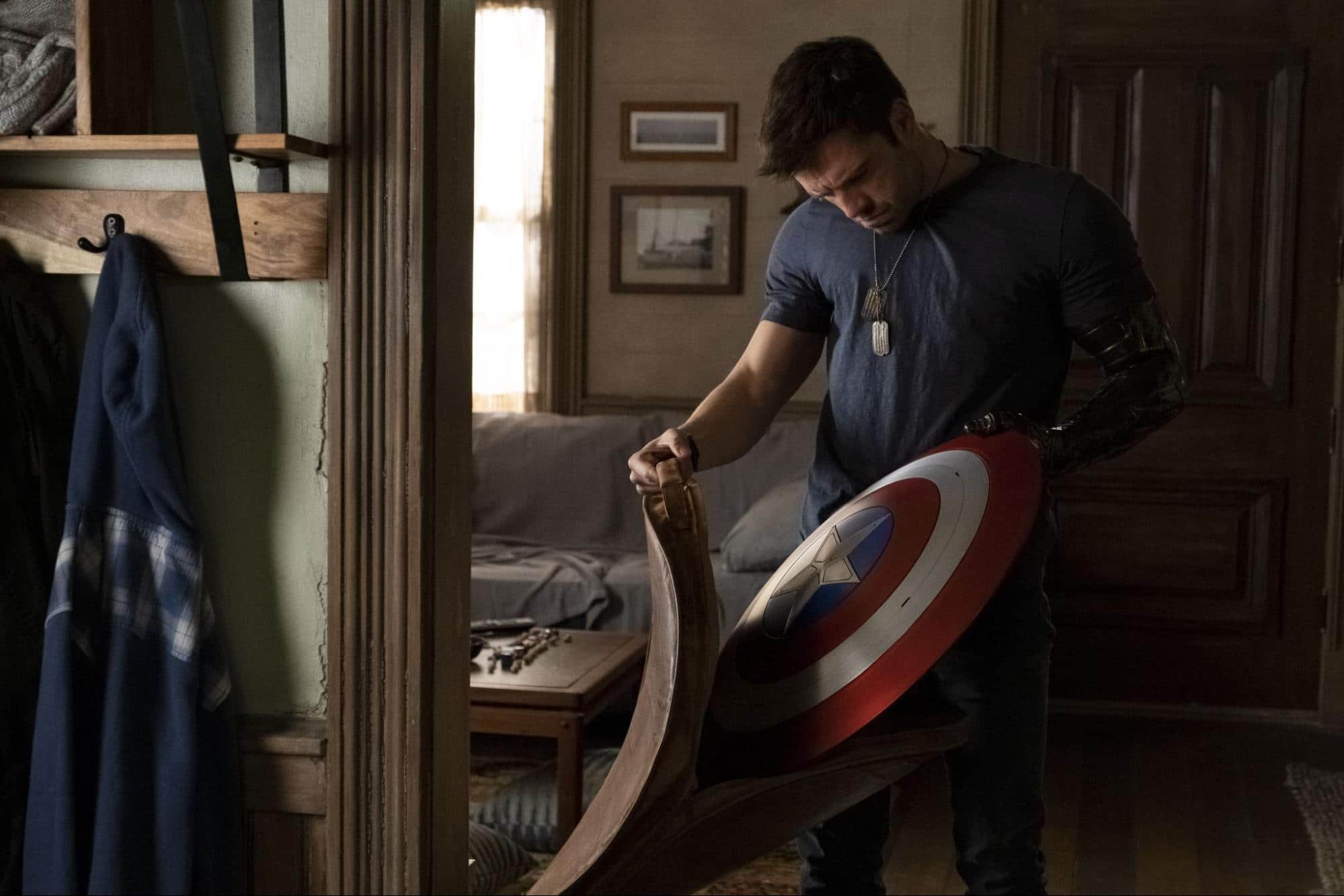 Bucky with Steve's shield in The Falcon and the Winter Soldier.

I think The Falcon and the Winter Soldier did such an amazing job with so many things. In particular, Bucky was the mirror that reflected the fan's feelings about Cap's loss. I had a hard time accepting Chris' departure because I felt like I needed to see more of Steve's friendship with Bucky, of how it changed and evolved with time. I felt like their time was cut extremely short. I know they are just fictional characters, but they're characters whose story changed my own life on a pivotal level. So, for me, it was just as hard accepting that Steve's gone as it was for Bucky, and I connected to Bucky on a whole new level. 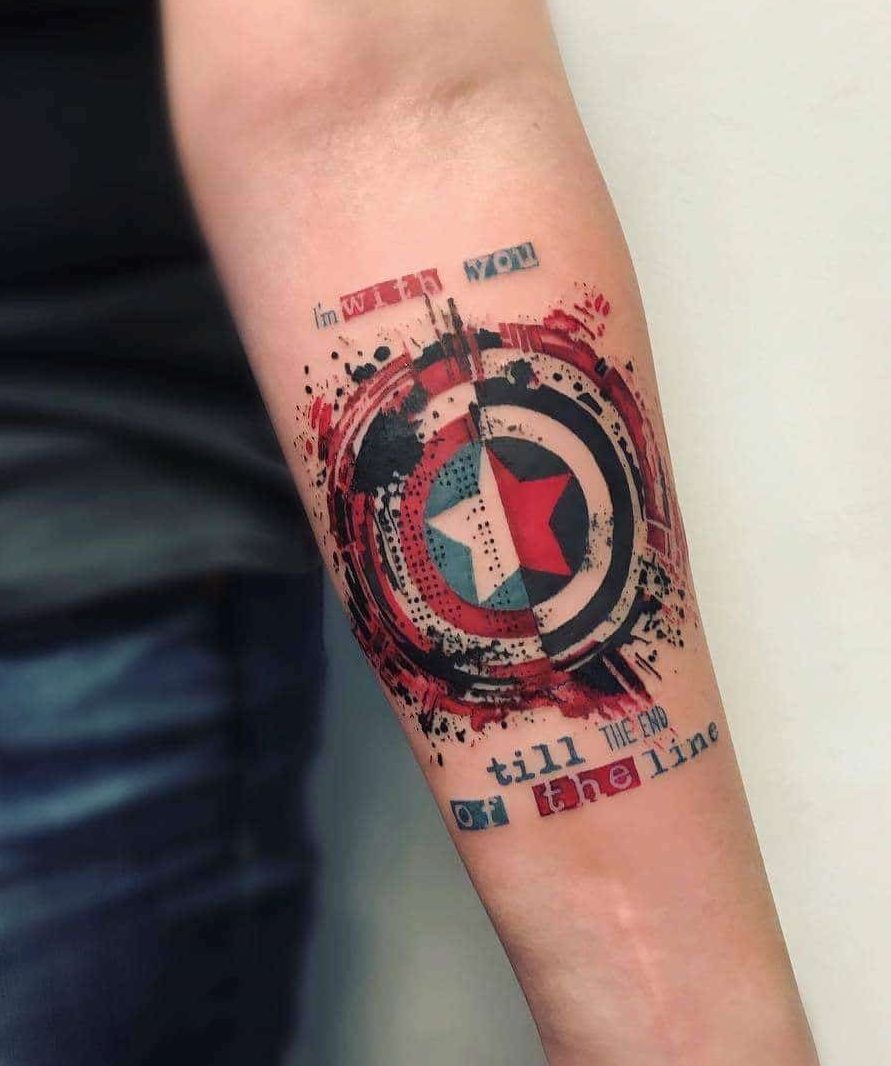 "I'm with you till the end of the line."

The show managed to change this Bucky's view on life so effortlessly that I've found a new friendship to look up to and treasure: Sam and Bucky. In losing Steve, Bucky gained a new—dare I say even more important—friendship through Sam. That realisation hit me when, at the end of their fight with John Walker in Episode 5, Bucky lifts the shield up, walks over to Sam, and drops it next to him, all while the reimagined version of "End of The Line" from composer Henry Jackman starts to play in the background. Why is it important you ask? Because in The Winter Soldier, when Bucky fights Steve on the helicarrier, that music is exactly the same, reaching its peak right when Cap drops his shield and tells Bucky:

It is also the scene where, at the end, Steve tells him the famous line that changed my life and inspired my tattoo. So, putting the same music in Episode 5 with the same symbolic drop of the shield meant a change in how these two men looked at each other. I saw how Bucky was able to let go of Steve, and, at the same time, I saw how I could do it, too. 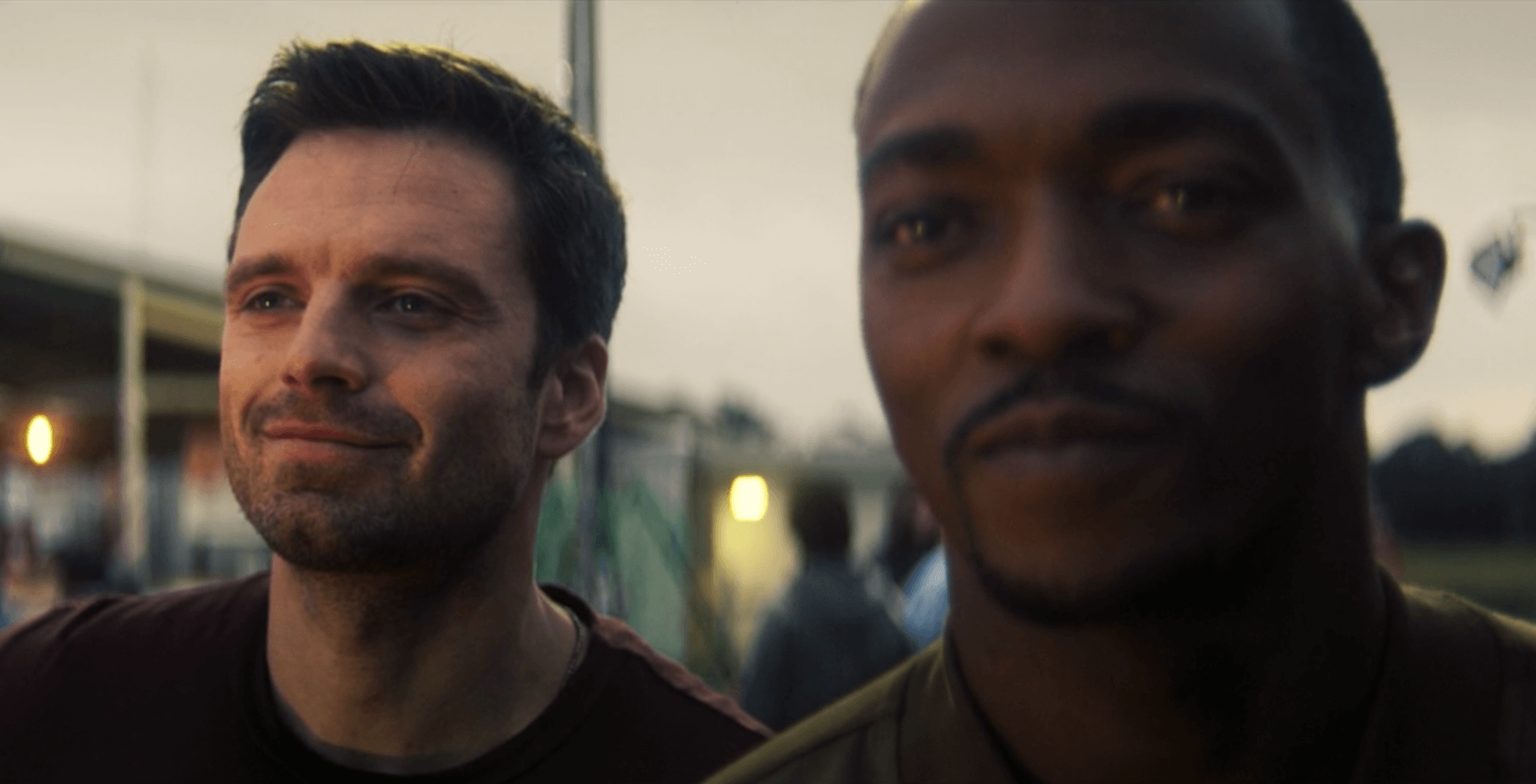 Steve and Bucky's friendship will always be very important for me. It helped me through some of the toughest times when I struggled with accepting myself when I desperately searched for meaningful friendships only to fail miserably when I was suffocated by my own self-hate. The tattoo I have is my way of saying thank you and to show my biggest respect. I think it's time to upgrade it though: it will need the Falcon's wings around it. 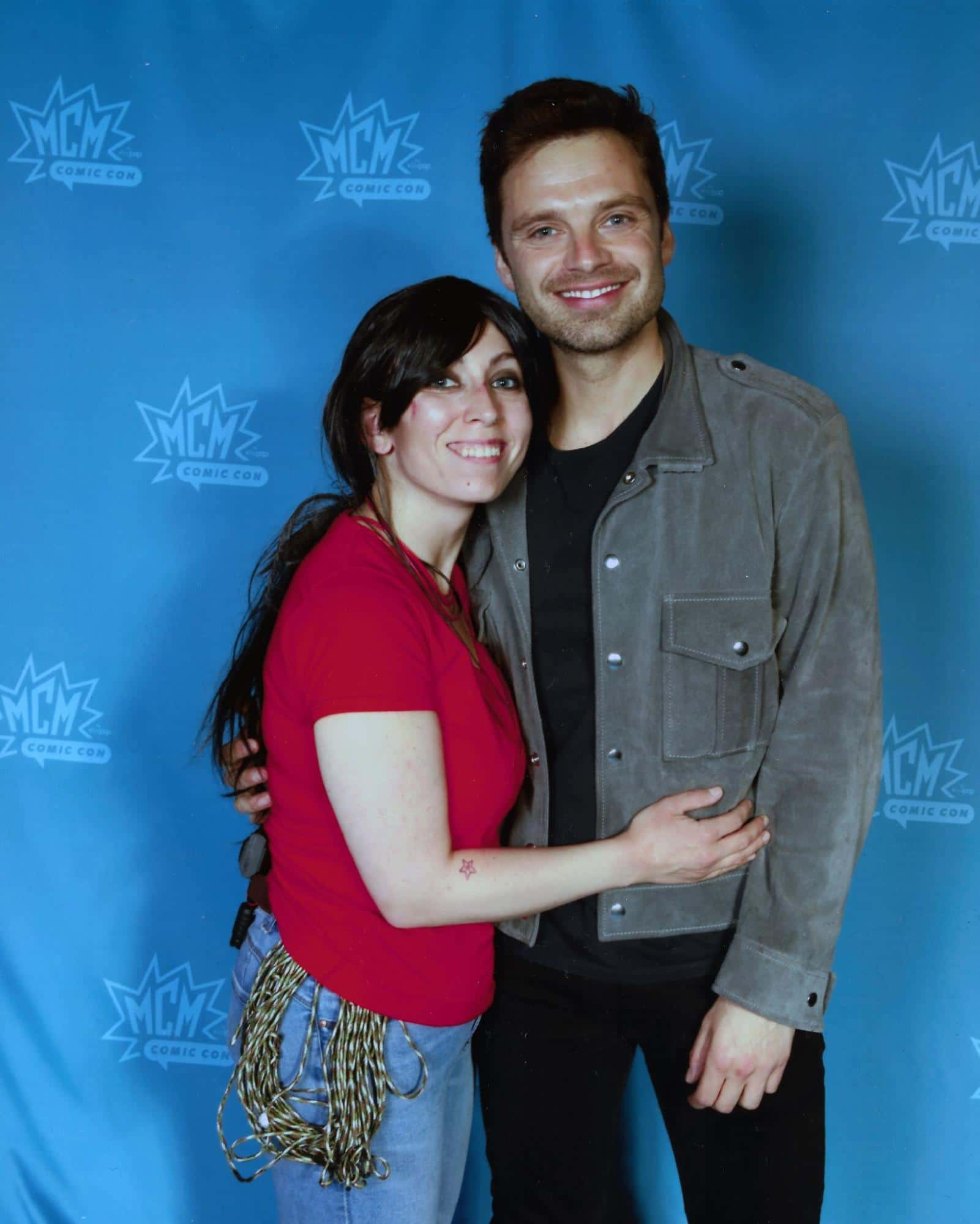 And just a tiny story to the end. I met Sebastian Stan in 2019, but I was so overwhelmed that I was just happy to give him my Winter Soldier drawing and completely screwed my chance of telling him about how his and Chris' character helped me through so much. So maybe, by some miracle both Sebastian and Chris will see this. They saved me and they didn't even know it. So all I want to say is thank you from the bottom of my heart.

This article introduces a new series called "Ink Spot" featuring Replayers' stories behind their pop-culture-inspired tattoos. Got a special tattoo story you'd like to share? Email us members@retroreplayshow.com and we'll match you with one of our contributors to get your story.

[box] If you are someone who's struggling with depression or have suicidal thoughts, please, don't be afraid to reach out and ask for help. You are never alone: Suicide Prevention Lifeline – talk to someone now[/box]