How my love of the Harry Potter universe grew, from the first book to where it is now 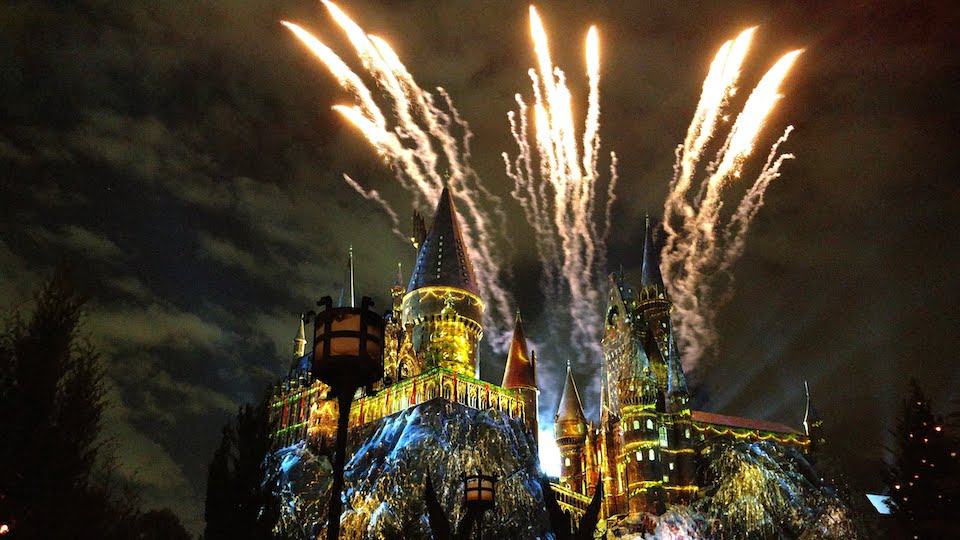 I had someone ask me recently how I felt about Harry Potter growing to be what it is now. I found it a very important yet thought-provoking question. Before I answer, allow me to introduce myself as the Harry Potter obsessed fan girl that I am, and earn the credit of your reading. 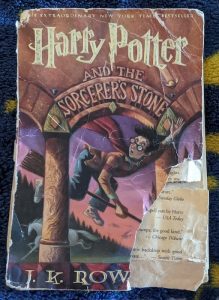 My first Harry Potter book, now well-worn and well-loved since I got it as a gift from my grandparents at age nine.

I grew up in a town that had very few resources. It's a tiny town in West Virginia where cell phone service and Wi-Fi is legally prohibited due to the extraordinary amount of science happening there. Due to this, our exposure to current pop culture was artificially limited.  In order to watch movies, we bought the DVDs. Gathering video games was a once-a-year ordeal where we received what we wanted at Christmas and had all year to play them. Books were hand-me downs. One of the first books I received as a gift was Christmas of 1997, when my grandparents gave me this paperback version of a story they had heard about on the news.  They lived in Washington, D.C., and had access to a wider variety of stores. Nine-year-old me assumed it was "just another book from the grandparents" and shrugged it off with a sheepish "thanks." Little did I know the gift I had just received.

I began reading the book that Christmas. I remember the first chapter being a little difficult to get through, but I pushed through. I got to the second chapter and remember thinking, "Wow, this is interesting," and just kept going. By the time I finished the book, I had been exposed to the most magical, intricately woven, beautiful story I had ever known. I pushed the book into every one of my family members' hands. "You HAVE to read this," I would say. "Just get past the first chapter. Just you wait." Most of them read a little bit but didn't devour it the way I did.

That book was Harry Potter and the Sorcerer's Stone. 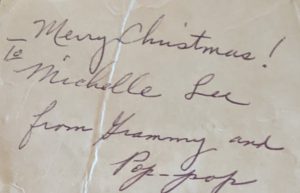 Did my grandparents realize the world they were opening up for me?

The obsession had started. I quickly learned there was even a second book coming out. Oh my gosh, there's MORE? I re-read the first book until the second book came out, and here is where the importance of where I grew up comes in. In the late 90s, audio books were not a viable option for me at that time. Amazon was a bookstore that was able to ship books to people’s doorsteps the day they were to come out. My now 10-year-old mind was blown. I can have the book? New? As soon as it comes out?! What is this… MAGIC?! Then the day came. The book was released, and there it was on my doorstep. I read through it so fast, my parents didn’t think I understood any of it. 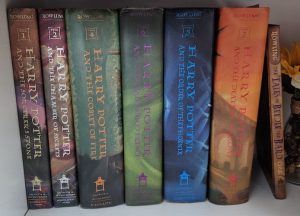 I eventually got these nice hard-bound copies of the Harry Potter books, but I still have those well-read first copies, too!

This continued over the years as each book came out. The fifth book came out the day we were returning from a vacation, and, as we were pulling into the driveway, that glorious box was there. As each book launched, I would re-read the previous ones to prepare, refreshing my mind and reinforcing my now-thorough comprehension. I don't mean once, or even twice. I read them back-to-back-to-back to the point my family was annoyed that that's all I was doing. My parents pushed me to read something else. They bought me the Chronicles of Narnia and the Lord of the Rings. I read them, but as soon as I finished them, Harry Potter was back in my hands. I read them so often that one day, after yet another push from my parents to do something else, my solution was to re-write them myself. I sat in my room after a lecture, hearing about how I need to pick up something other than a Harry Potter book, so I picked up a notebook and thought, "If I can't read them, I know them well enough that I can just write them." And I started that. I could have re-written the first and second books word for word. I never finished my defiant task, luckily, but the knowledge that I could was enough to get me through that day, but that's how often I read them. 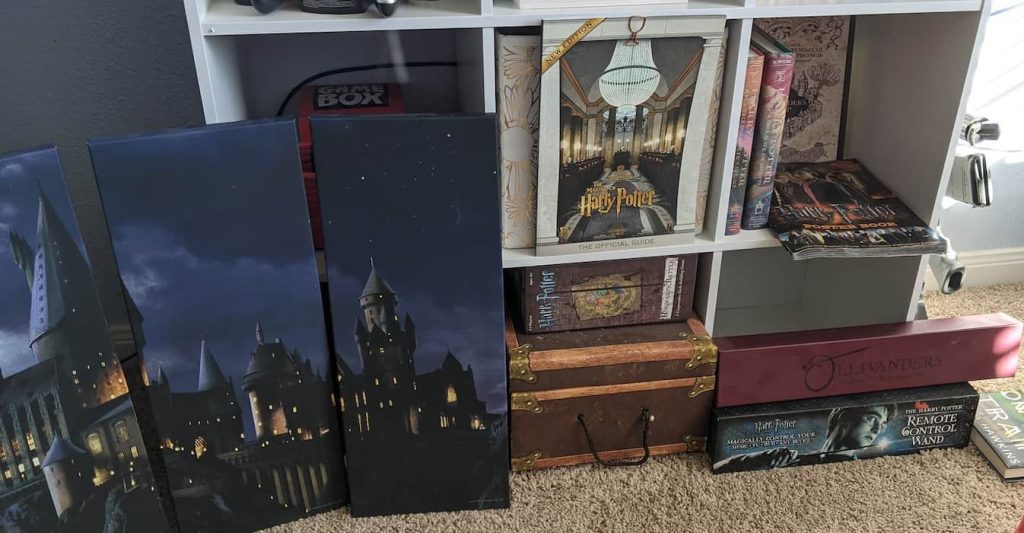 Just a few things from my Harry Potter collection.

Along with the reading obsession came material possessions. Birthdays and Christmases passed, and my go-to was always, "You know anything Harry Potter will do."  I began a collection of everything Harry Potter I could find. I have an entire bookshelf at home full of magazines, Bertie Bott's Every Flavored Beans packages never opened (ew, now that I think about it), cookie tins, calendars, an umbrella, and so much more. I even slept in a Harry Potter bed set. (I may or may not still sleep with the pillowcase from said set.) 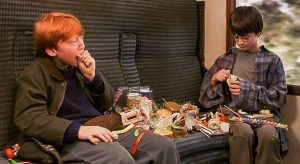 Ron (Rupert Grint) and Harry (Daniel Radcliffe) meet and share a pile of candy in the first Harry Potter film.

Within this time frame, the movies began to come out. When I first heard there would be a movie made, I was absolutely thrilled. Everyone else in the world would be able to see the magic! They could share in the joy that is this universe! I read every article written about the cast selection, the director, the music composer (which I was knowledgeable about to begin with, I love movie soundtracks) and the locations they would be shooting. Our family made special trips an hour and a half across a mountain to go see each movie! We were able to take friends, and, by the time we were in high school, we could make the trip ourselves. It was not a premiere, but I didn't even know that was a big thing. What I always wanted to attend was the premiere at a bookstore! That wasn't possible, but seeing the movies in theaters was a big step.

Throughout the time the seven books came out, and the movies were being made and released, there were other books from within the series that came out (The Tales of Beedle the Bard, Fantastic Beasts and Where to Find Them, etc.). I, of course, got those and gobbled them right up. 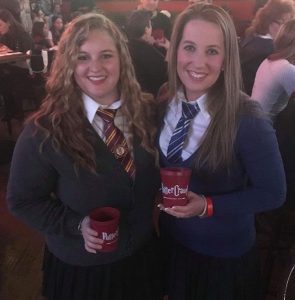 Me (left) and a friend in our Hogwarts uniforms

Also within this time, The Wizarding World of Harry Potter was revealed and opened in Orlando, Florida. Oh. My. Gosh. This place, the world I spent so much time in, was becoming a reality? In 2011, my sisters' gift to me was a trip there. Are you kidding? The night before we were heading to the park, I let her know that I would be picking and prodding at her to look at everything, so just be prepared. The next morning, we walked in, and my jaw dropped. It turned out, she was the one poking and prodding me to look at everything. I could not believe it. She wanted to be sure I wasn’t missing anything, but I promise, I was not.  I couldn’t even speak. I was in HOGSMEADE! The sights, the sounds, the SMELLS! My 9-year-old self was released in my 23-year-old body!

Since that trip, there have been several Harry Potter Worlds created, as well as an addition to the one in Orlando. (Diagon Alley, anyone?) There have been spin-off movies that are still in the works, an eighth book, and a play (the latter are somewhat the same). My unique upbringing and exposure to the Wizarding World has positioned me to speak with confidence and passion. I have been able to grow with this series, and watch others grow within it. I have walked Diagon Alley and seen ladies and gentlemen with graying hair wearing a house shirt, and I have seen children pestering their parents to buy a robe and wand. I see children's toys, video games, websites dedicated strictly to the world of Harry Potter. There are forums, blogs, trivia nights, Halloween costumes, games, puzzles, and anything and everything you can think of now published with Harry Potter on the name. It has easily become one of the most recognizable symbols, stories, and fandoms in the entire world. 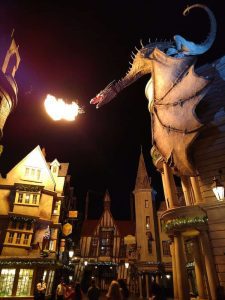 To me and my nine-year-old self, this proves what I knew all along: The world is inviting to anyone and everyone, and the story is ever evolving and open to infinite interpretation. It also proves that it stands the test of time. I could enjoy it as a child, and I am now seeing children enjoying the story I fell in love with. Fans today can enjoy the magic of Harry Potter across a multitude of mediums: books, movies, websites, games and clubs. This unrestricted access might not have been something I could take advantage of when I was young, but it allows new generations to carry the torch, continuously reinforcing the success that Harry, Ron, and Hermione have created. Sometimes it's celebrated with hot debate, fun discussion, or just casual knowledge of one's Hogwarts house, but it's a phenomenon that has been able to expand to what it is now and affect generations of hearts and minds today and for years to come. To me, this means it's a love story worth developing. This is the true magic of the Wizarding World.

Now, I could get into how the movies actually dampen our imagination, and the age old the-book-is-always-better debate, or how in many communities the books have been banned due to their content. However, I will save that for a future article and keep you on the edge of your seat until those come out.

Are you a Harry Potter fan? What's your story? Share your own fan reflections in the comments and let's discuss!

Matthew Reilly is an author known for pulse-pounding, pulpy action thriller novels that are so much fun to read. Rohan looks at his debut foray into the world of film to see if that signature Matthew Reilly magic survives the jump from page to screen.
by Rohan Elliott | June 28, 2022 | MoviesReviews 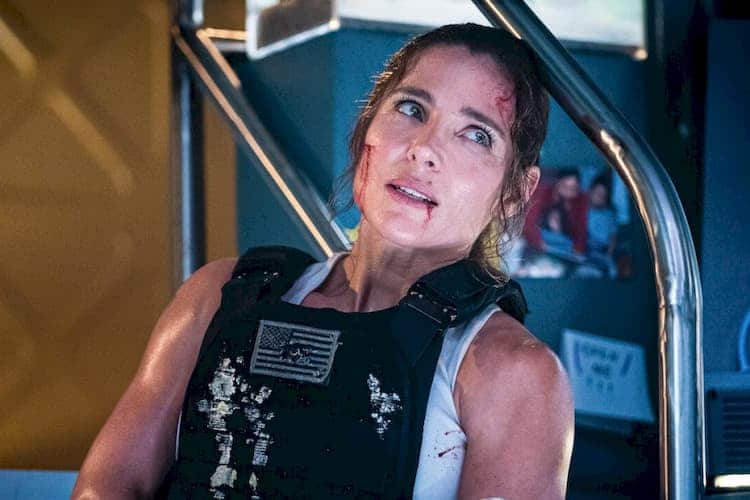 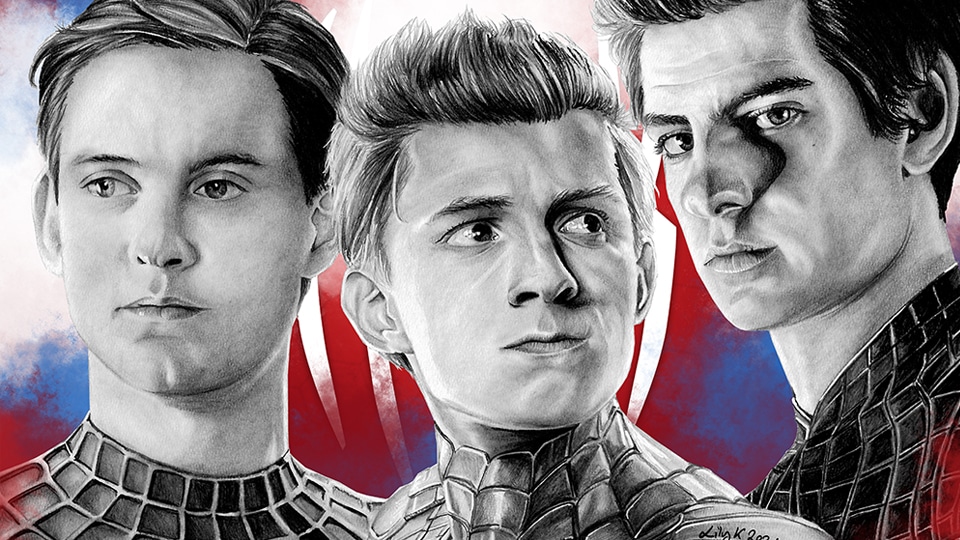