It was the fall semester in 1995, and I was in my senior year at NC State. My roommate, Josie, and I had made a ritual of hanging out in our room in Watauga Hall on Thursday nights. We would order pizza, watch TV, and talk a lot. This was before it was normal to have computers or mobile phones around, so it was just us and the TV, and it was some of my best times in college. It was then that Josie introduced me to a show she had fallen in love with over the past year: Friends. It quickly became my favorite television show of all time, and it would be my port in the storm of life over the next nine years.

As I have reminisced in this 25th anniversary year of the show's debut, I have found myself buying shirts and keychains, and I even bought and assembled the LEGO sets while rewatching the series on HBO Max (that's me with the sets in the image above). That inspired me to share with you all the place the show holds in my life and how different the show seems through the lens of the world we live in today.

"It's about that time in your life where your friends are your family." - David Crane 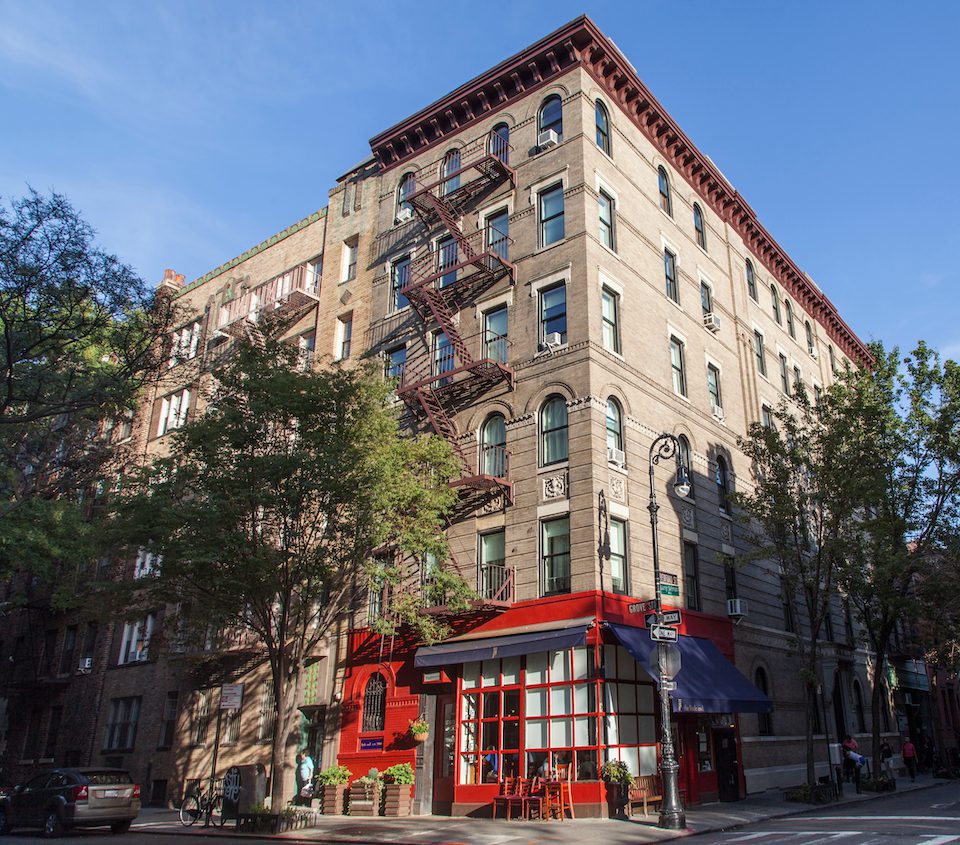 This building at the corner of Grove and Bedford in Manhattan was used as the external shot of the apartment building in Friends.

There are few shows as iconically Generation X as Friends. Running on NBC in the U.S. from September 1994 through May 2004, the show featured a group of six adults living in the East Village, and it covered their lives from their late 20s into their early 30s. Show creators Marta Kauffman and David Crane explain in the 2021 special Friends: The Reunion on HBO Max that the show is inspired by their personal experiences living in New York in their 20s. Crane states that the show is "about that time in your life where your friends are your family." Kauffman and Crane worked with Kevin S. Bright to executive produce the show throughout its ten-year run.

When the show started in 1994, the characters ranged in age from about 24-29, and I wasn't far behind them having turned 21 that year. Between the shared Gen X cohort with the characters and their relatable life scenarios in the show, I was able to connect to these six friends in ways I couldn't connect with characters on Seinfeld, Frasier and other contemporary hit sit-coms from that time.

"Welcome to the real world. It sucks. You’re gonna love it." - Monica

Those TV friendships stayed relatively consistent while my life was in a whirlwind. During the show's run, I struggled in a dating relationship, graduated from college, got married, changed careers, moved seven times, met new friends, lost touch with old friends, got divorced, and finally discovered how to enjoy living on my own. For a decade, it felt like I was always a few months on one side or the other of some major life transition. Yet through it all, I could sit down on Thursday nights and connect with Friends. I could relate to the challenges the characters faced and share in their joy and pain (cue Rob Base and DJ EZ Rock). I figured if they could get through their struggles, maybe I could, too.

"So why don’t you be a grown-up and come and watch some TV in the fort?" - Joey

Like with any friendship, my relationship with the show had its ups and downs. After creating an interesting arc between Ross and Rachel in the first three seasons, the writing in Seasons 4-6 settled into a pattern of "will they/won't they" that got to be monotonous. Fortunately, that was balanced by building the relationship between Chandler and Monica through Seasons 5-6. Chandler and Monica became my favorite thing about the show, and two of my favorite series moments were in the last four episodes of Season 6: Chandler revealing to Phoebe (and the audience) that he's going to propose marriage to Monica, and the proposal scene itself.

Confession time: I was a really bad fan during the last two seasons. That was around the time that my The Lord of the Rings fandom and friendships were a major part of my life. I'd also been laid off from a job and had to move in with my parents while going through my divorce. I actually didn't see any new episodes of Friends for almost two years until both seasons were out on DVD. I then caught up with my TV friends and, while watching the series finale, had a really good cry.

Ross and Rachel's cyclical relationship is an underlying theme from the first episode (left) to the last (right).

While I went through all my own changes over ten years, so did the world around me. I evolved with that world, and the show evolved with its characters gaining more maturity and empathy. I was a very different person by the end, and so were they.

But, like many people, when I rewatch the show now, the humor doesn't land quite the same way as it did then. I have different social attitudes than I did during the show's original run, continuing to evolve with the world around me. I think that's the reason why I've heard so many folks say in recent years that the characters in the show are awful, that the jokes are in bad taste, and that nothing in the show is realistic. I can definitely understand where that perception comes from, but I want to share why I feel that perception is short-sighted. 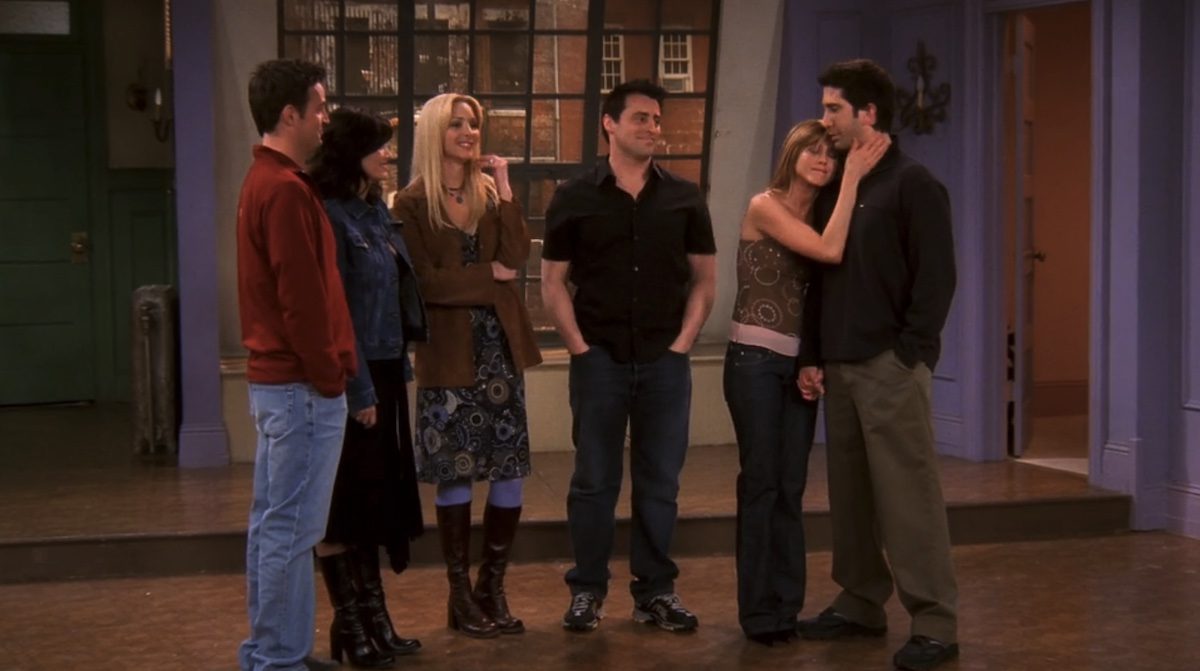 The cast of Friends in the final scene of the last episode.

First off, I love the show as a situation comedy of its time. A sitcom creates characters that you have a vested interest in and mixes in some absurd comedy that you can laugh at because you know it's not realistic. For its first four seasons, Friends shared the same NBC Must See TV primetime block on Thursdays as Seinfeld. Seinfeld was dubbed the "show about nothing" and often tops lists of some of the greatest TV shows of all time, all while being far less realistic than Friends. Sitcoms from the earliest in TV history through the 90s were designed as an escape from reality, and Friends stayed true to that. 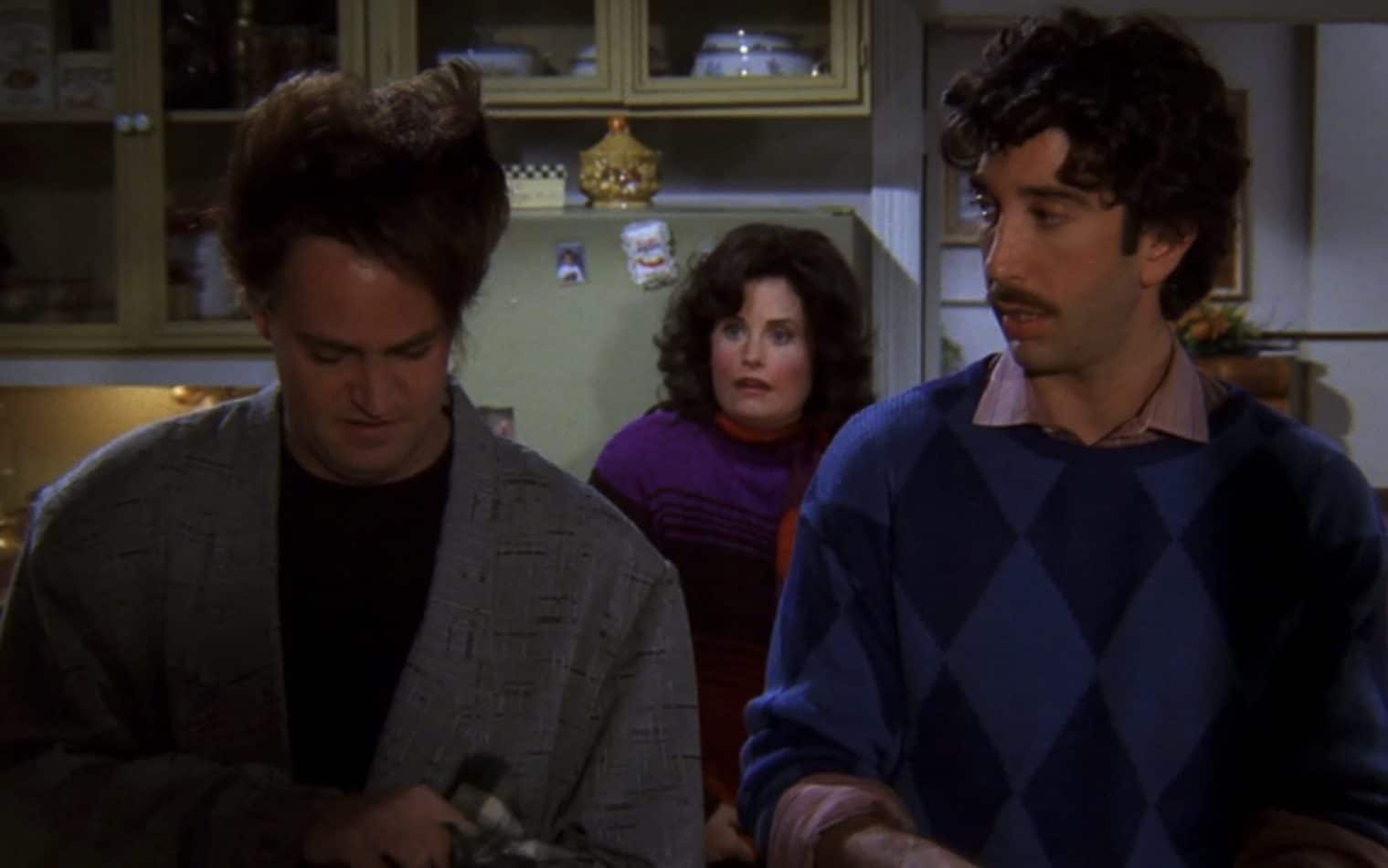 In a Season 5 flashback to 1987, high-school-age Monica overhears her brother Ross's college friend Chandler say he doesn't want to be left alone with Ross's "fat sister."

All that said, and even though I'm a life-long fan, I admit that Friends used misogyny, homophobia, and lookism as frequent sources of humor. I admit that it just doesn't "feel" the same now because Western society's social norms have changed. Today, large parts of society are fighting hard against toxic masculinity, body shaming, and homophobia, including as sources of humor. In modern entertainment, if characters show these attitudes, they're either the "bad" guys or they become enlightened as their characters evolve. For example, consider the male chauvinist characters in the ensemble show The Big Bang Theory (2007-2019) who are openly ridiculed or humiliated for chauvinist behavior in their professional and personal lives until they learn to respect women and treat them as equals. 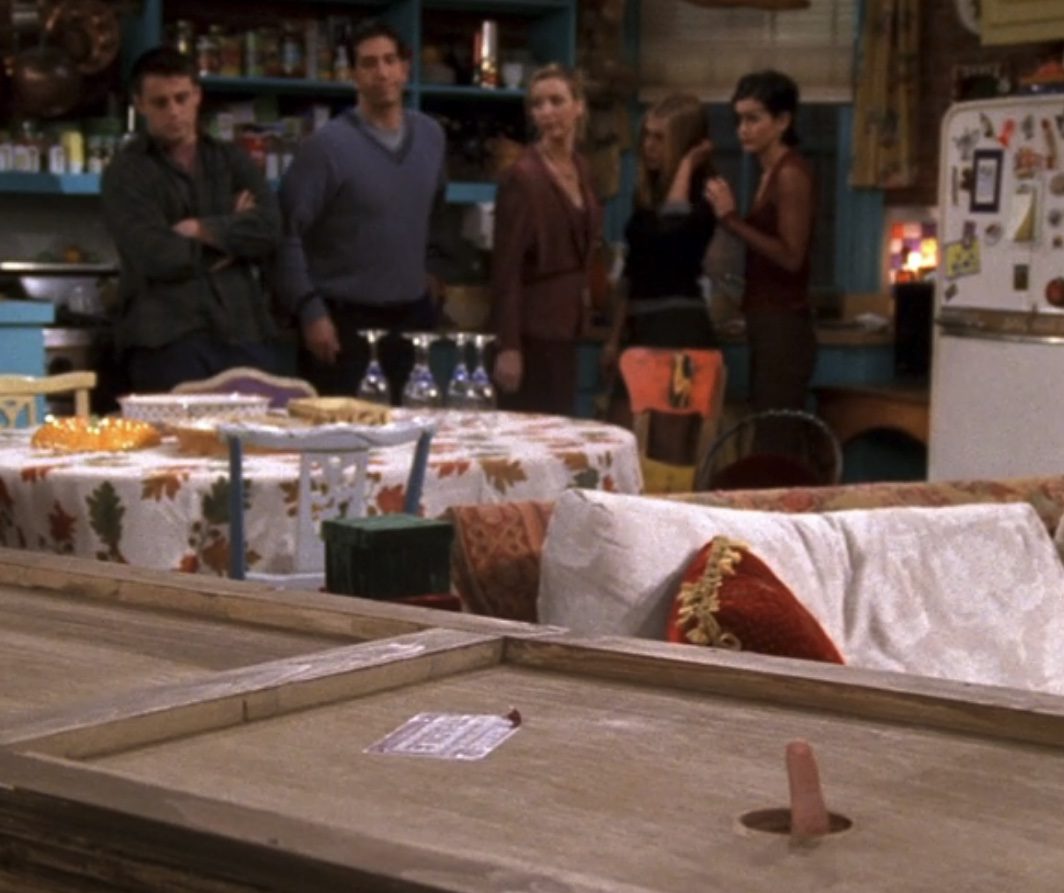 In Season 4, Chandler spends Thanksgiving in a box to show atonement for not being honest with Joey.

However, in spite of Friends not reflecting today's societal standards, the characters do often call each other out on socially inappropriate remarks and insensitive behavior. Those calling out those behaviors often reflect the audience's real-life reactions. In fact, much of the humor around that behavior doesn't come from the behavior itself but from how someone else is reacting to it. For example, a repeated theme in the show is Ross being excessively uncomfortable by anything that suggests a man isn't "manly" enough. But it's always characters' being put off by Ross's behavior that drives the humor (and sometimes drama) in the scenes. We laugh when Ross continues to be hung up on showing someone how manly he is while his friends point out how ridiculous he's being. Ross stays a sympathetic character by experiencing the consequences of his abhorrent behavior and, eventually, showing remorse and growth.

"That is brand new information!" - Phoebe 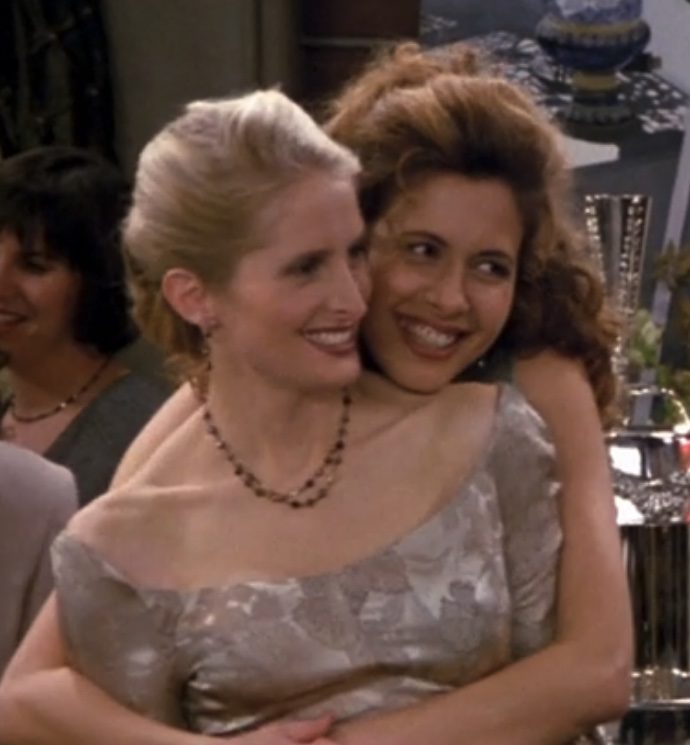 Carol (Jane Sibbett) and Susan (Jessica Hecht) got married in Season 2 and were the rare example of a normal, healthy family relationship throughout the series.

What some people forget or don't realize about Friends is how groundbreaking it was for its time. The first two seasons prominently featured a main character going through a divorce and shared custody of a child, another character dealing with her parents going through a divorce, and a lesbian relationship and marriage. Sitcoms prior to this rarely touched on similar subjects, and there was a lot of press about whether NBC was doing the right thing by having such themes in their primetime TV shows.

Later in the show, we saw a lot of other story elements that were completely new or very rare for a sitcom: a reference to a polyamorous relationship; a surrogacy to help a couple have children; an unplanned pregnancy; a single mother choosing to raise her daughter on her own; and a couple facing infertility and choosing to adopt. For a sitcom, it had its share of heavy topics and dramatic moments. Friends led a movement of sitcoms becoming more serial and more willing to take on dramatic story arcs and less comfortable topics. And it helped pave the way for the equally groundbreaking Will & Grace in the late 90s.

“I’m not great at the advice. Can I interest you in a sarcastic comment?” - Chandler 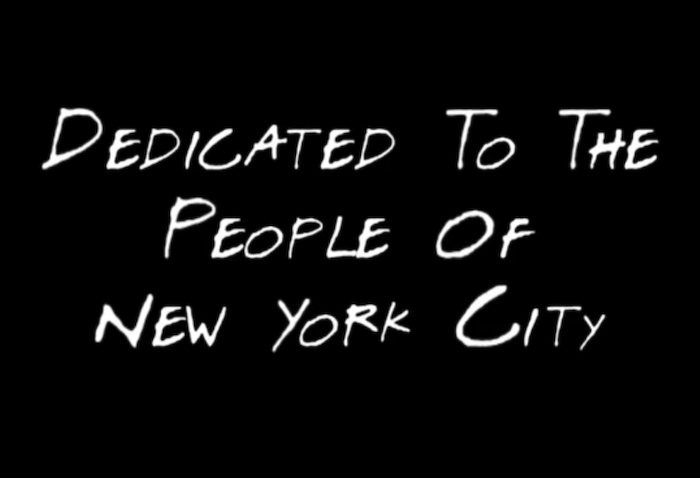 I can't complete this article without mentioning the show's overlap with the historic events in New York City on September 11, 2001. That day shaped how Americans would feel looking back at those Manhattan skyline shots throughout the first seven seasons of Friends. I remember NBC announcing about a week later that the show would continue with its Friends Season 8 premiere on September 27, keeping its original story and humor as a break from the tragic events and aftermath. This was in keeping with a general feeling across the U.S. that the best thing we could do to honor the people we lost was to show our resilience and move forward. Friends producers avoided any skyline shots of the World Trade Center towers from that season forward, and the Season 8 premiere was dedicated to "The People Of New York City." In Seasons 8-10, there were other things in the show that subtly honored the people we lost and the people who worked hard to help the city recover. Otherwise, the show chose to continue its role as an escape for us all during that difficult time. 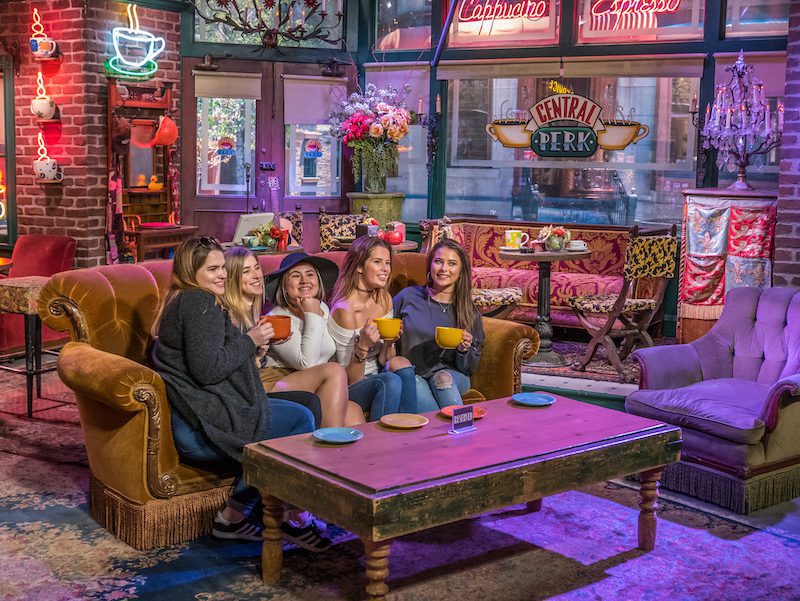 Thanks for taking this trip on the memory subway with me. One day I hope to take that Warner Bros. Studio Tour (wbstudiotour.com) and visit the Central Perk set and iconic fountain in the show's opening credits. In the meantime, I thought up some fun community-inspired questions about Friends while going through my recent rewatch. Think you know the answers? Drop-in a comment below and I'll let you know how you did! 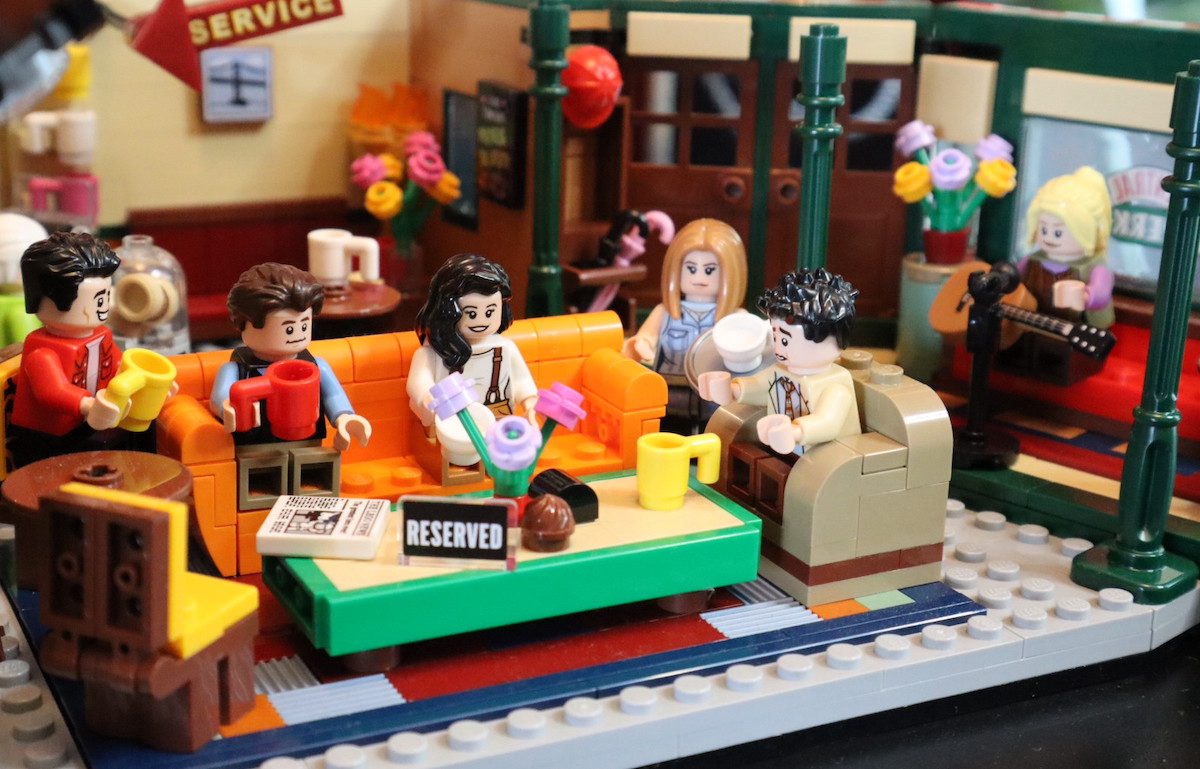