Disclaimer: Sims were definitely harmed in the writing of this article.

Psychoanalyst Steve McKeown says that playing games can serve as a healthy escape from everyday life. He also argues that it's a better alternative to other vices like alcohol and drugs. (source: Pemberton) 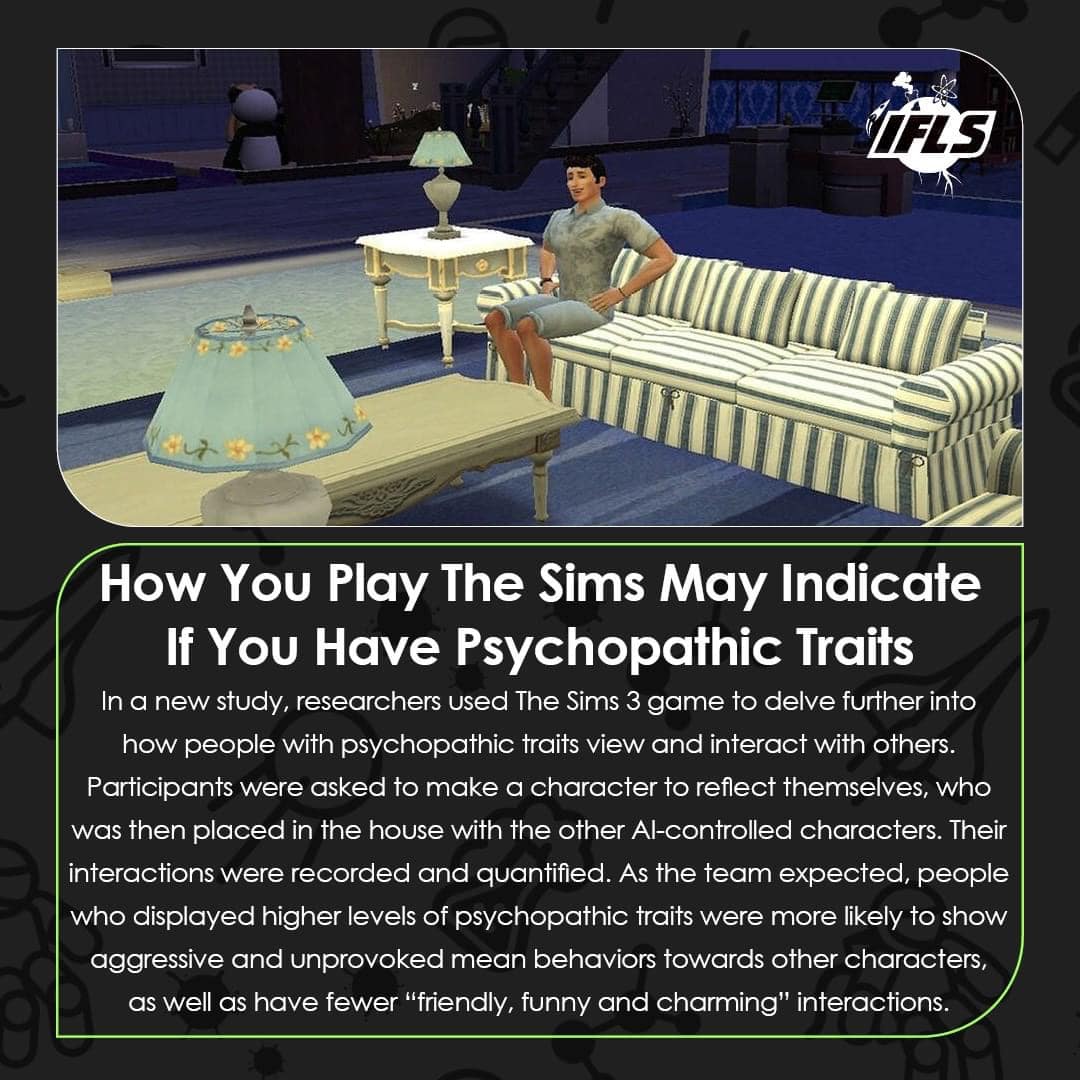 McKeown says, "The suggestion that we may spend more time in a virtual world than the physical one has been developing speedily over the years and has fast become a way in which we can live an alternative life in exactly the way we want.”

McKeown adds that there's a risk for people to “burn out” if they don’t have a suitable means of escape. Steve said that The Sims game series (Maxis and Electronic Arts, 2000-present) is a particularly positive way to do so because players can explore their lives or personality in a way they hadn’t previously.

The Sims can allow a person to escape social normality, its pressures and chronic stresses that are so prevalent in the real world, it allows the gamer to create a perfect reality in which they play the main character and have full control over the outcome

So that’s a psychoanalyst’s thoughts on why we might play The Sims. But let me tell you how I started playing.

For me, it had a lot to do with Star Wars. YES, Star Wars! They added a pack to The Sims 4 for you to be able to travel to Batuu. The area in the game looks like the fictional world of Batuu created at Galaxy’s Edge in Disney Parks. Why would I not want to create a version of myself that can wield a lightsaber? 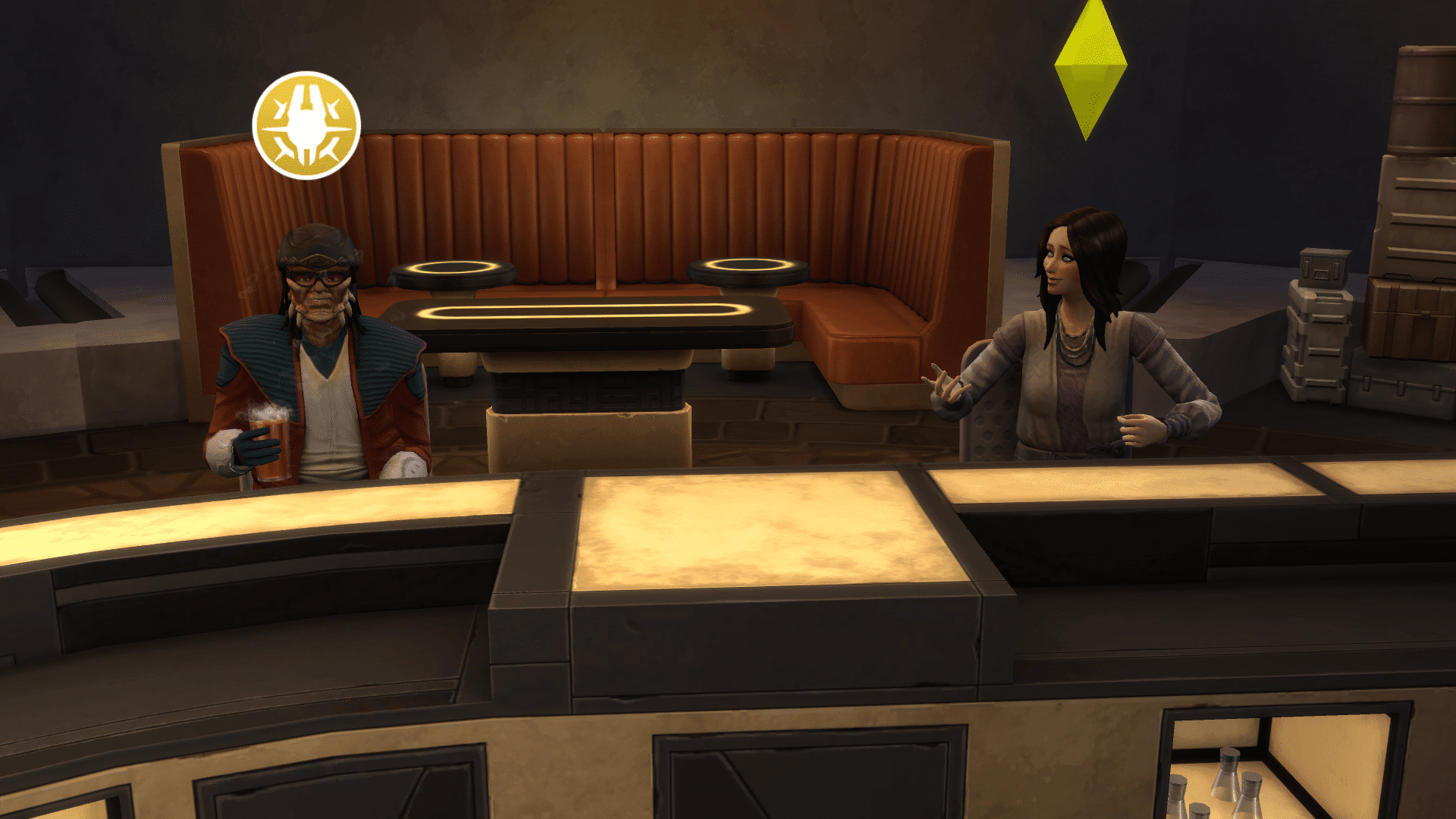 In case you couldn’t tell, I am a huge fan of Star Wars! I downloaded The Sims 4 onto my PlayStation 4. I tried and tried to create a character on the PlayStation that would remotely resemble me. I couldn’t get the controls to work, so I answered a quiz and it just created a Sim -- that looked NOTHING like me! Rage quit number one in the books.

I then moved to the PC version after being told by another Sims player that I should definitely not play on the PlayStation. I was able to figure out the controls much easier on PC to make a more customizable Sim.

Okay, let’s get started! Time to pick a job. Okay, I will be an office worker since that’s kind of what I do now. I let her make her own food and go to the bathroom when she needed to. Oh, wait... I had her start gaming and now she won’t use the bathroom in time. Well, that was interesting. CLEAN UP ON AISLE FIVE! 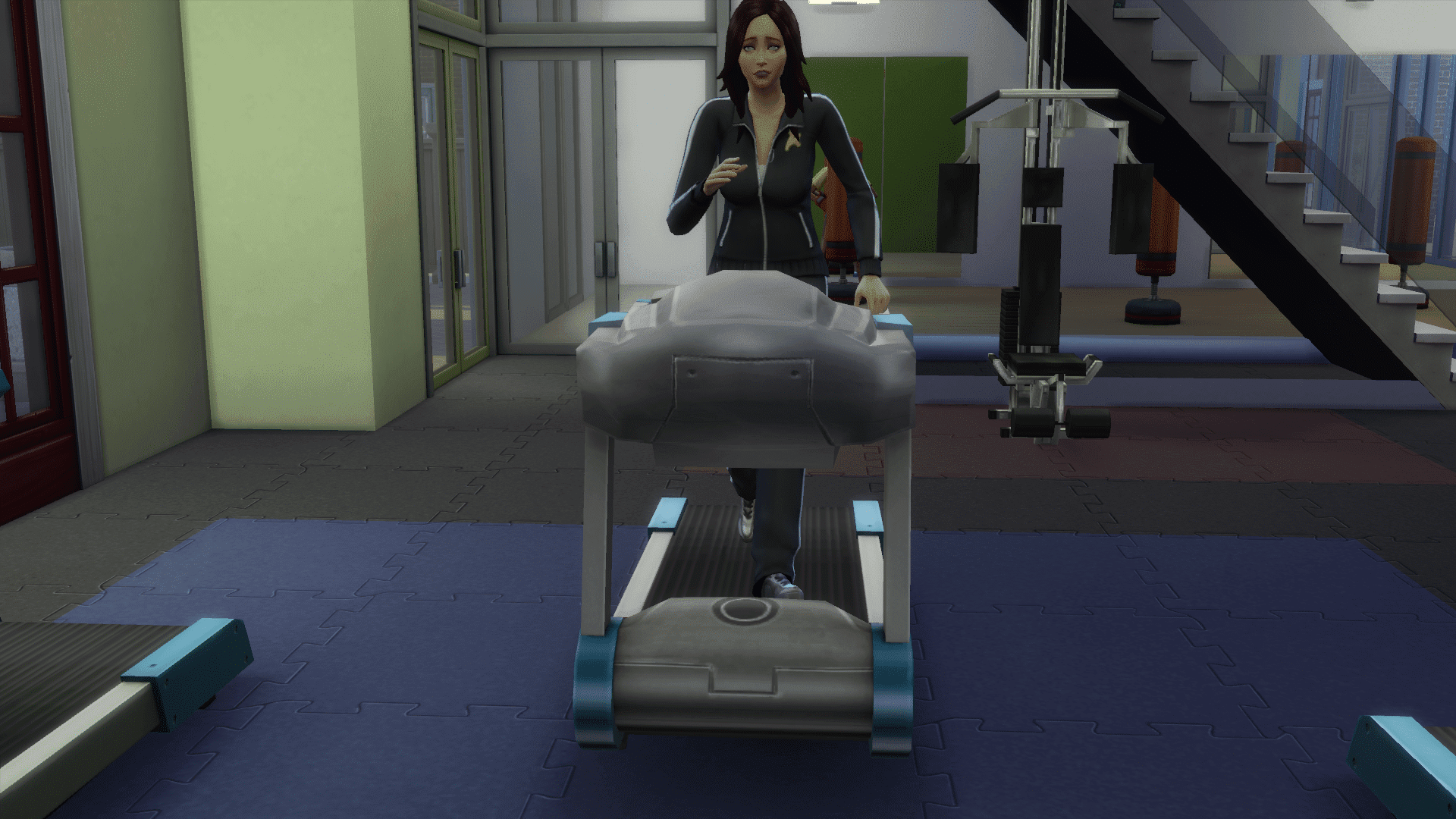 Also, one day my Sim woke up and she was FAT! I didn’t know this could happen! I guess if you allow your Sim to only eat cheese for weeks and not work out that can and will happen. Reality check one. Okay, gym time, and let’s learn to cook. How is this an escape from real life? THIS IS REAL LIFE!

My Sim set herself on fire trying to cook. Multiple times. Enough to the point that she started dating a fireman. I mean, why not if he’s going to be there all the time anyway? 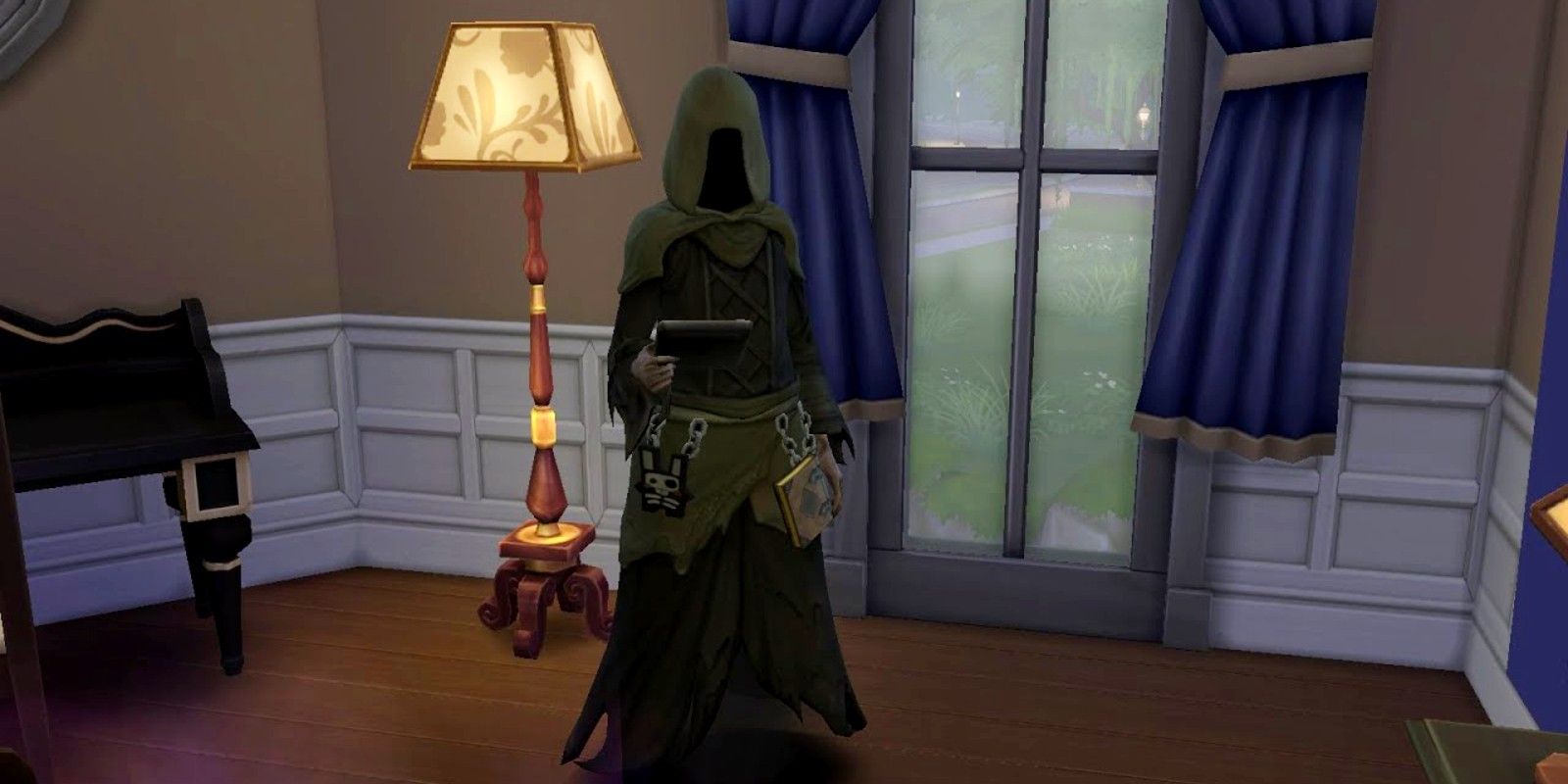 I also had a Sim friend come over to my house to visit and DIE! I had no idea what to do with the urn, so it just sat there. In my living room. The grim reaper came to take her away and just hung out in my house. He sat on my couch brooding, reading my books, and just hanging around creeping everyone out! Thankfully he did not eat my food (he had probably heard about my cooking). Then, to top it off, my dead friend came back as an angry ghost and began yelling at me. 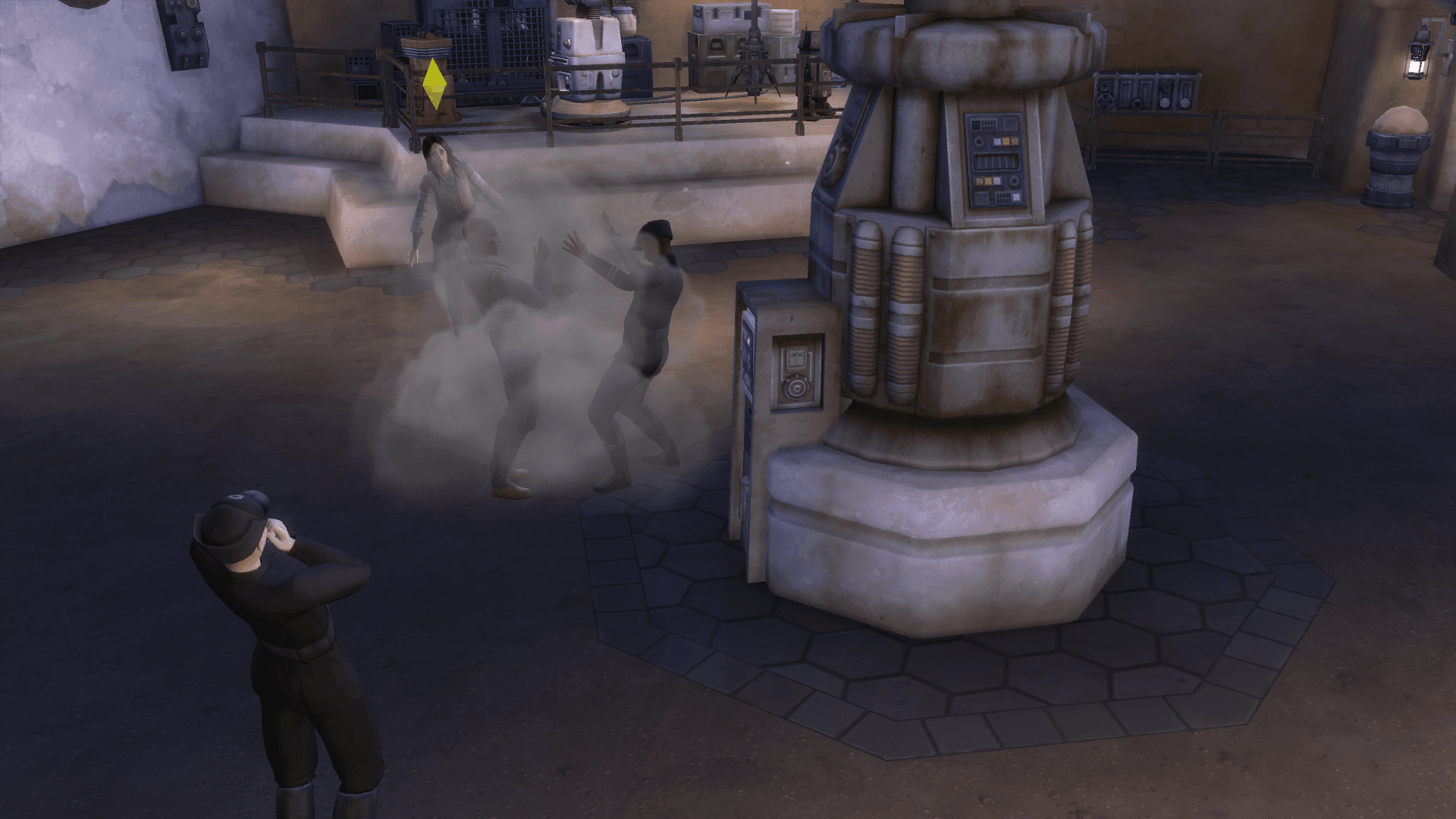 In the game, I've passed out from exhaustion. I've had visible smells emanating from my body that have driven people to the other side of the room due to poor hygiene. I've even had people walk in on me in the shower. What is happening? Is this how my life really is? Is this actually relaxing me and helping me disconnect from reality?

So, I did the next logical thing. Rage quit number two in the books, and I created a new Sim because, let’s be honest, my first Sim was just cursed. I picked a job as an astronaut for the second Sim because what the hell? I even got a roommate, and she was quite proficient at putting out the fires I set while cooking. 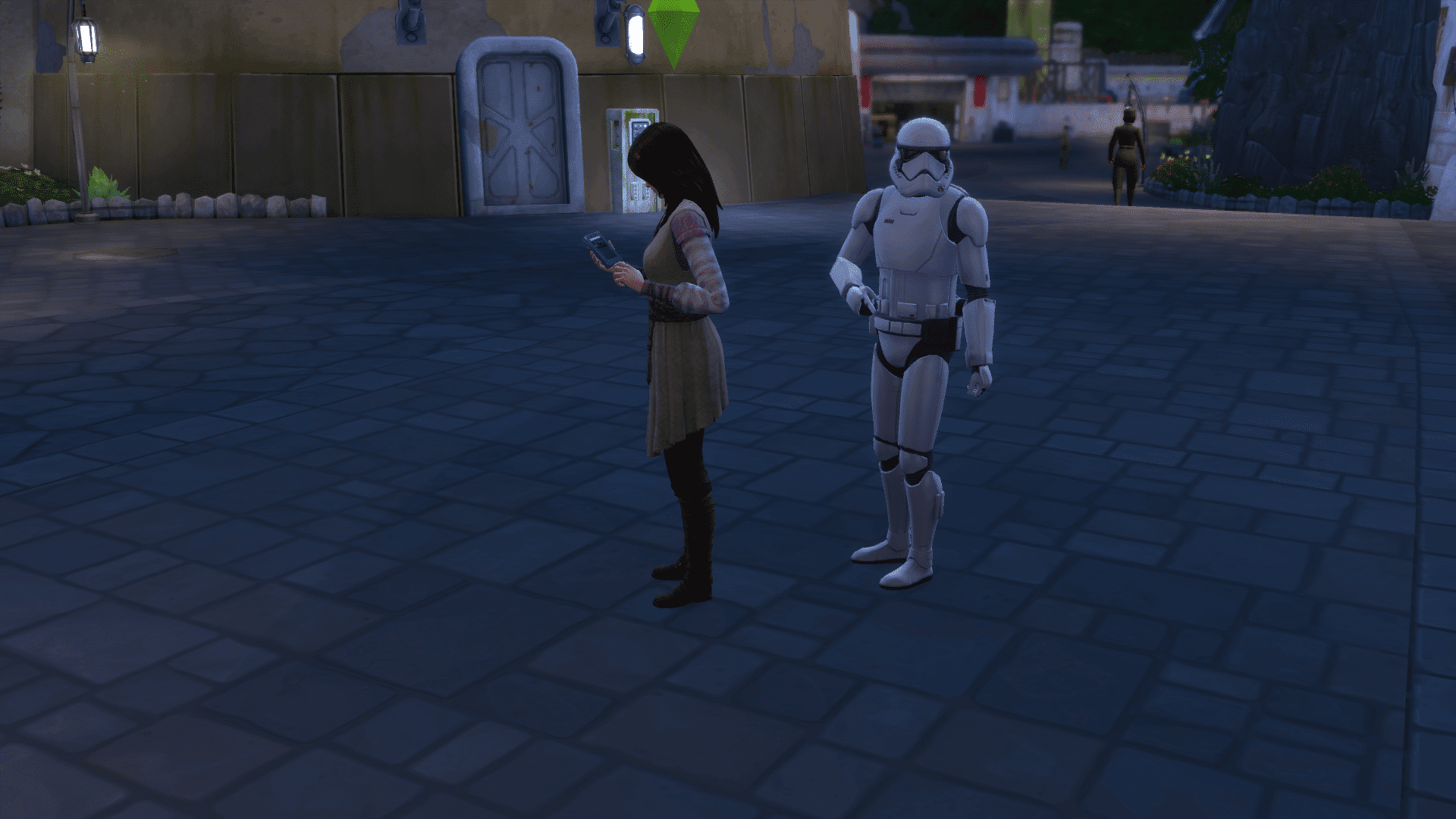 At this point, I've only just started playing, and I've only visited the Star Wars world of Batuu once. When I shared my misadventures with friends, I heard stories from other players on why your Sim should never be left unsupervised.

Friend and Replayer Charlotte Merritt (aka Snapefantasy) said that she loves to build houses and almost always has a pool. She explained that if you have the Seasons pack you should definitely delete the pool during winter. Apparently, Sims do not know that they should not have a pool party in the dead of winter.

Charlotte also said that, for her own stress relief, she would create a Sim in The Sims 3 and have them go swimming and delete the ladder. The inevitable would happen. Apparently, in The Sims 4, they learned to get out of pools without ladders (unless it’s cold of course). *Insert graveyard instead of the pool* 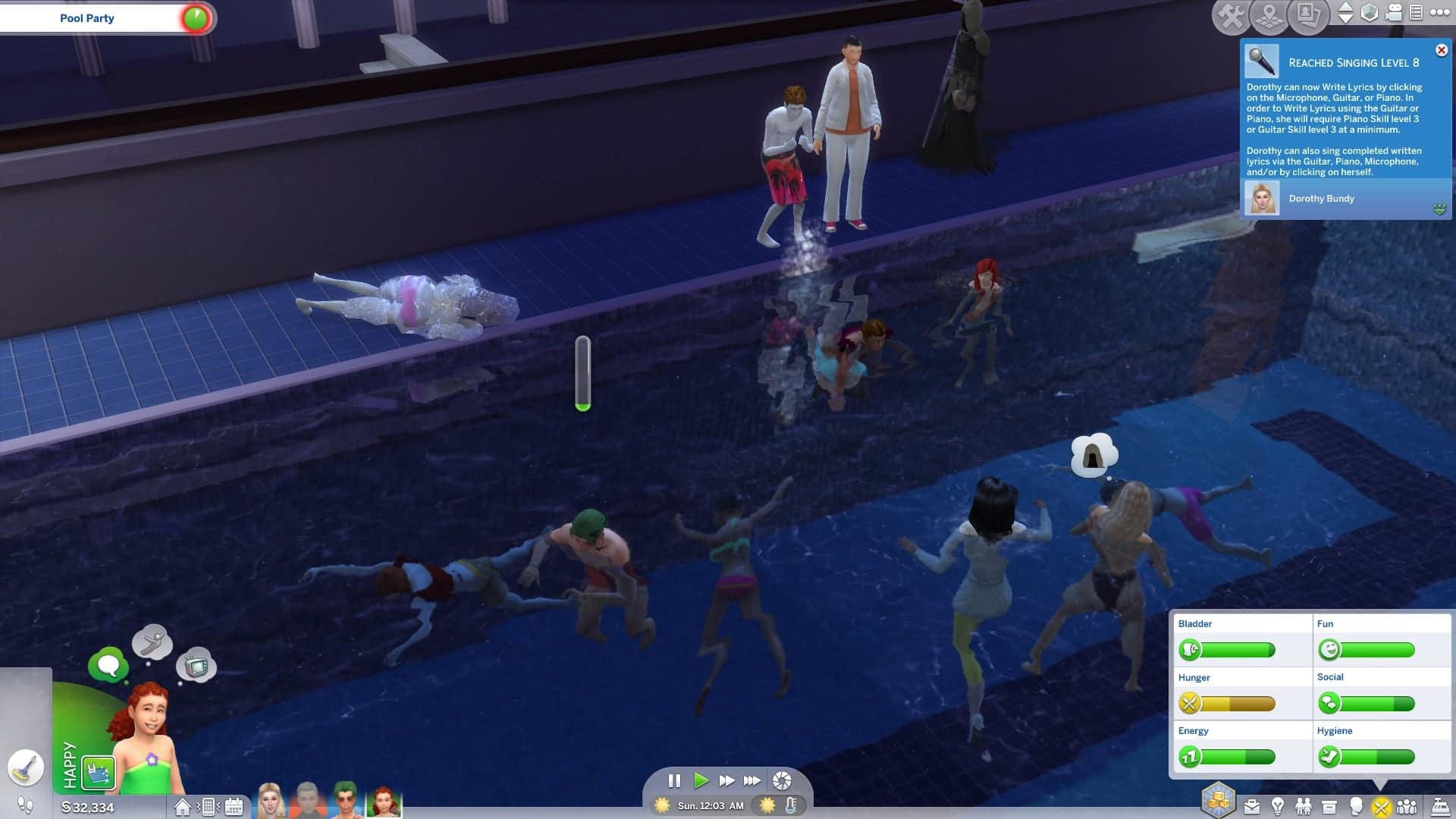 Freezing to death at a pool party in winter

Stephanie Judge (the lovely editor for Retro Replay) said that in The Sims 3 she had one of her Sims die in someone else’s house fire. He was a firefighter. She had to go back to the person’s house to get his urn. She also had her Sims take it upon themselves to go to a pool party, in winter (I’m sensing a theme here). She said there were about 20 dead Sims and she had to wait for the reaper to plead for her Sims death. And the Sims kept climbing in the pool and dying, so she had to wait a while.

Another time, Stephanie had a Sim die of heatstroke and a toddler playdate turned grim apparently. Not to worry folks, the toddler was resurrected. I think that's yet another argument against leaving your Sims unattended. 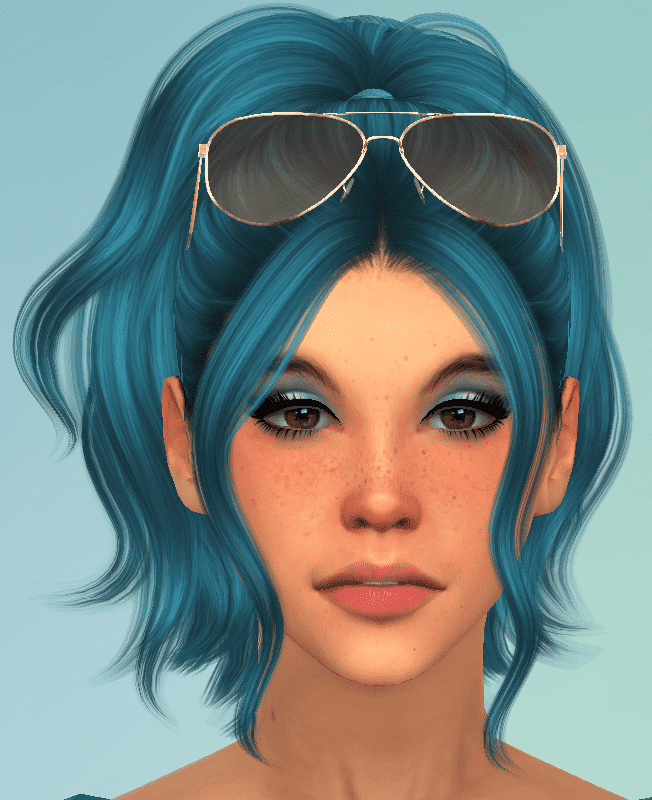 Amelia Brown, another friend, and Replayer said that she believes the game literally turned against her. She had managed to create a gorgeous Sim and had been playing her for almost two years. She liked her so much that she had her take the age-freeze potion to stop her from aging into middle adulthood. Whenever she lit the fireplace, house fires would break out, and she always died. Most times, she had just saved her progress, so she would just quit the game and restart to a point before the house fire.

Amelia said she was also abducted by aliens, electrocuted, and struck by lightning. She even had to have a family member resurrect her after she died suddenly. Amelia eventually got tired of fighting death and began a new Sim, declaring it was safe to say that it was never meant to be.

I asked each of these friends why they would subject themselves to this game of getting attached to these characters only for them to die in gruesome ways. Their responses reflect what psychoanalyst Steve McKeown was saying about the game.

Charlotte says that The Sims is a great stress relief for her. 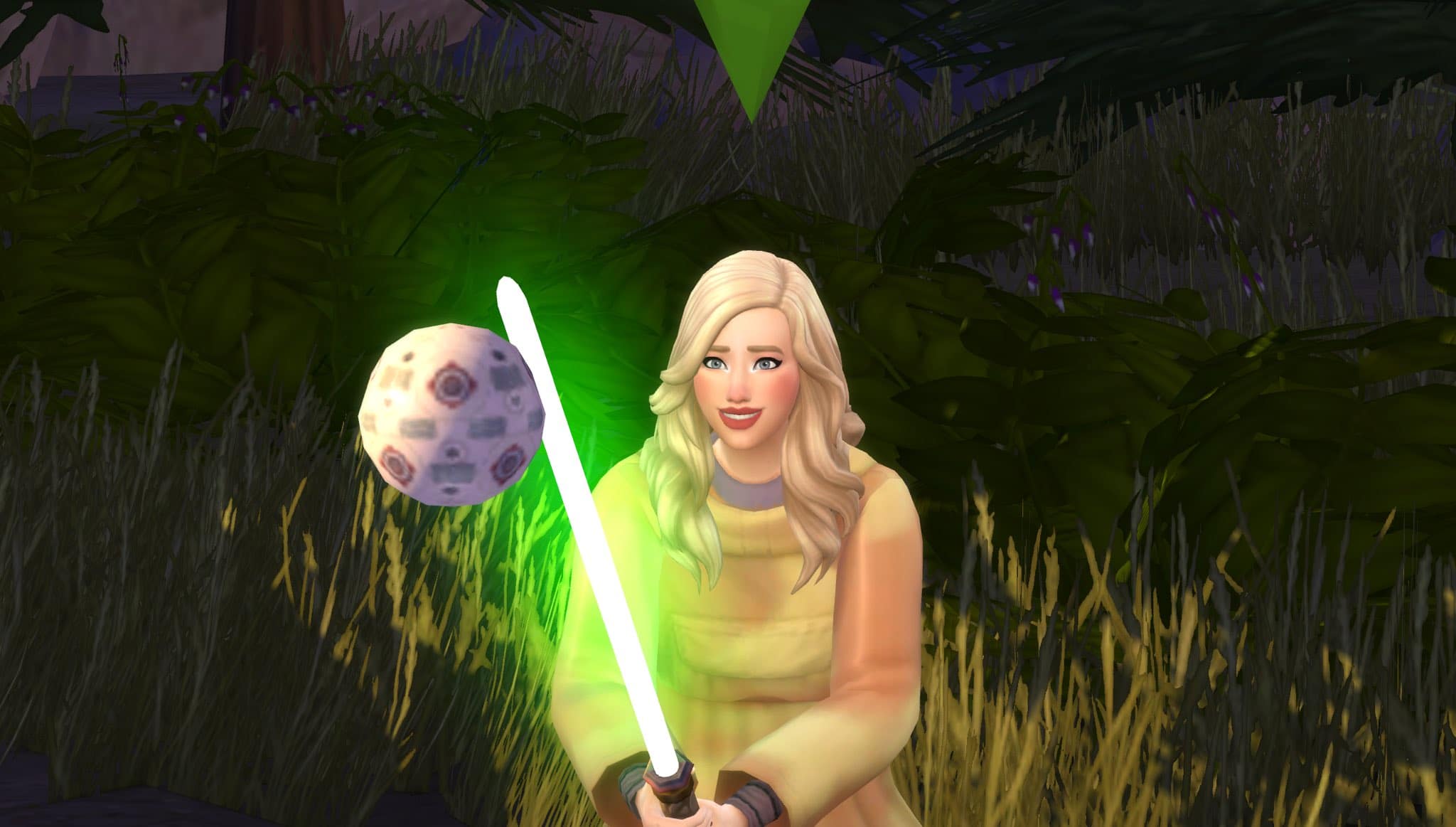 Stephanie loves to create her own worlds in The Sims as her occasional escape, and it’s a way for her to become whoever she wants to be. Stephanie spends most of her time creating the Sims and building their homes. She finds it very relaxing. With so many different Sims to play, whether it’s The Sims Medieval or the classic The Sims games, she says it’s a truly awesome gaming experience.

Amelia adds to this by saying that she's a very creative person and, between character design or just creating a narrative around the characters, The Sims is a creative outlet. She says she likes to spend days creating a family with detailed backstories and traits.

So, even though our Sims are obviously idiots (even if you give them an intelligent trait), we still continue to play them. And I’ll admit that it’s a guilty pleasure for me, too. Some days it’s just mindless entertainment to run or ruin the life of this poor moronic soul: making sure she just manages to cross the street without being hit by a car or getting her to the restroom in time. We do our best to take care of our Sims and probably give them a more entertaining life than we have. Mine is a Jedi! You can even buy packs, install mods, and create new and better kitchens, and yet your Sim will still manage to set themselves on fire, and I can’t help but laugh hysterically and then put her out. 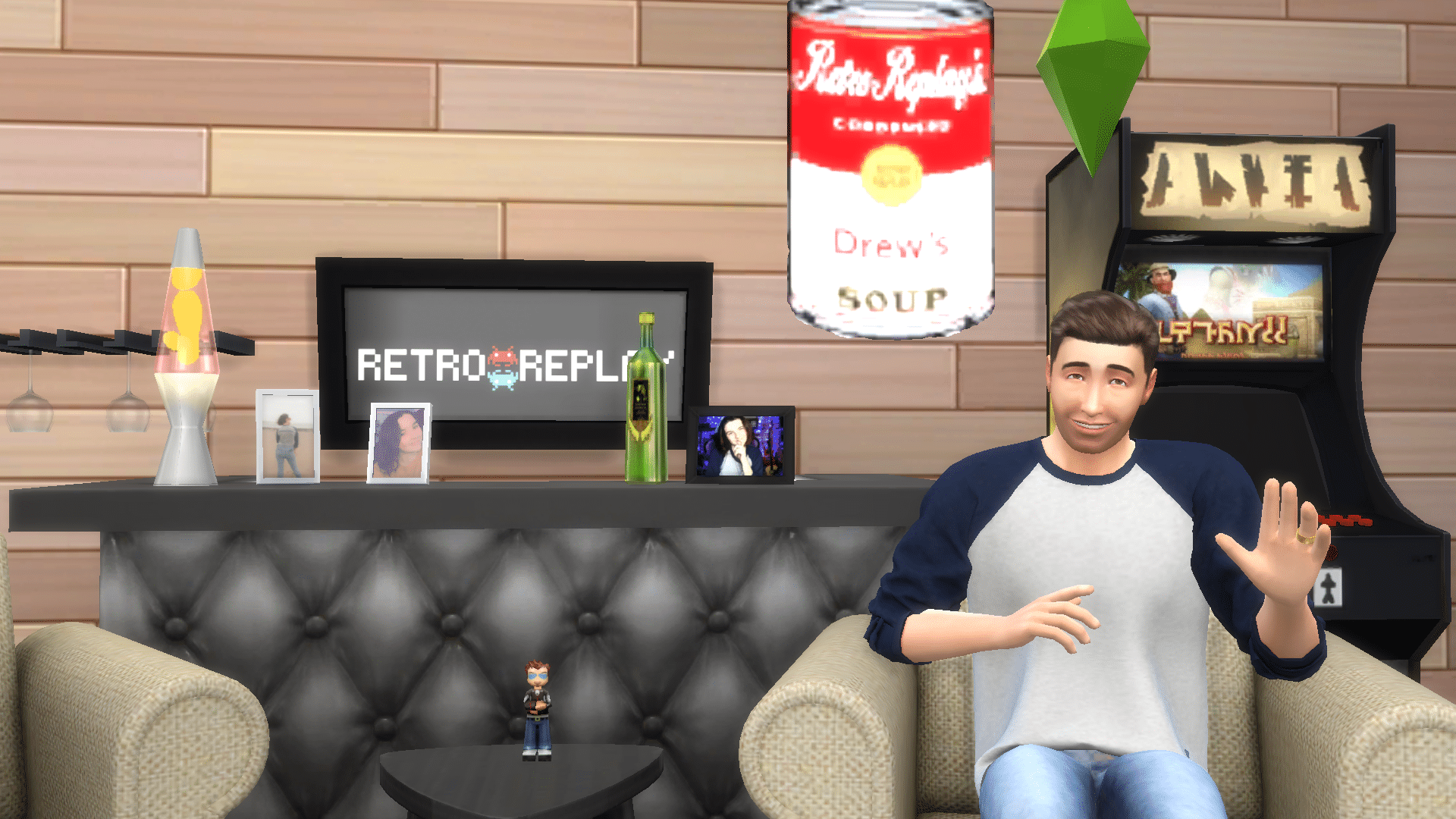 Why do you play The Sims or any kind of world-building, character-building game that gets you hooked? Are there any other games that you would consider a guilty pleasure that you put hours into? Leave comments below!