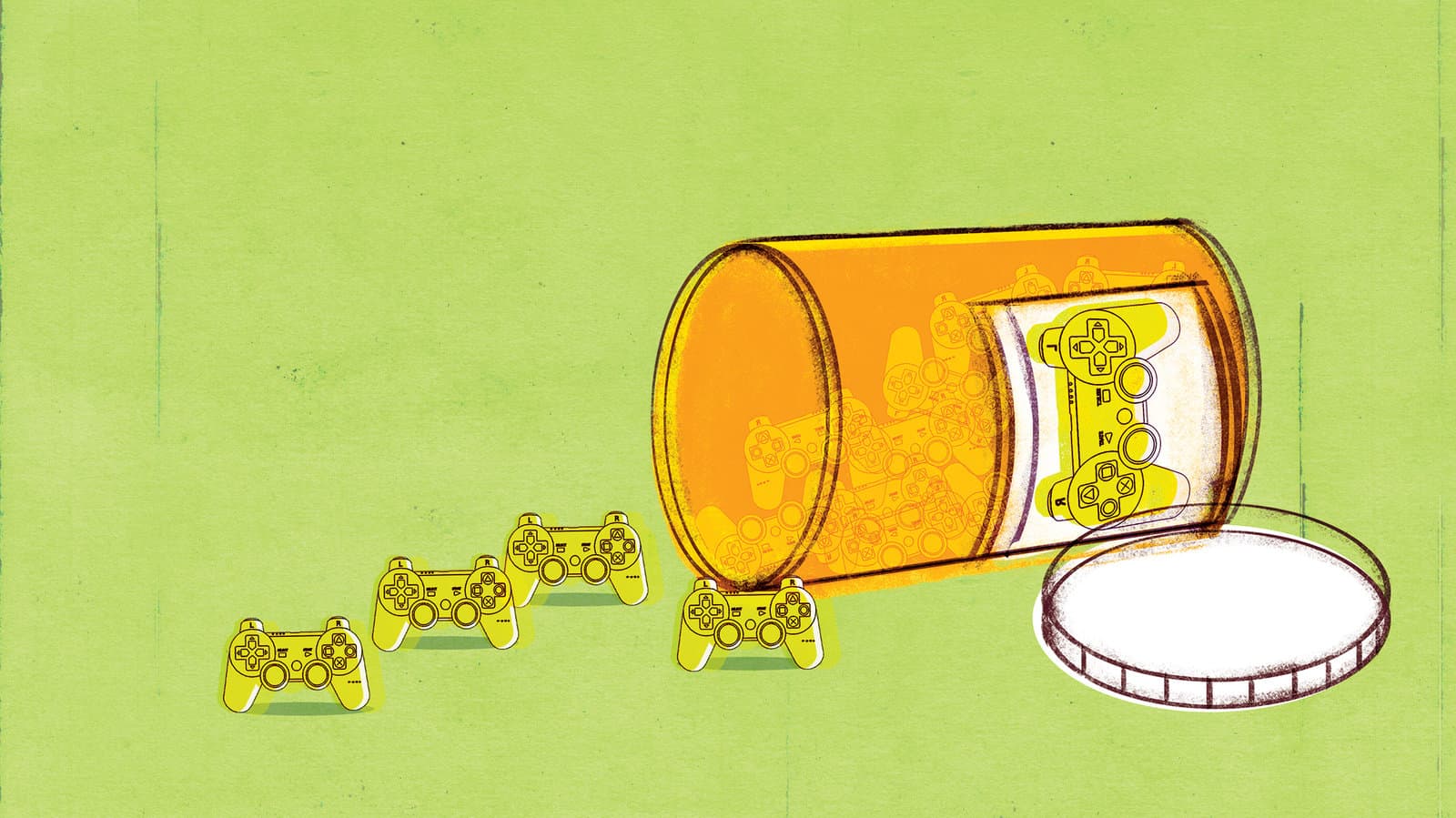 According to the National Institute of Mental Health and the Depression and Bipolar Support Alliance, bipolar disorder affects 5.7 million Americans or approximately 2.6% of the American population every year. I am one of those 5.7 million. In 2012, I was diagnosed as having bipolar disorder, and I have been treating it ever since. Unaware of exactly the cause of my behavior and why I felt the things I felt as I grew up and dealt with as an adult, hearing a doctor tell me this was both a relief and a worry. Beyond medication and a psychoanalyst, there have been many things that I’ve turned to in order to assist in my own personal therapy. One of the most helpful things, believe it or not, has been video games. 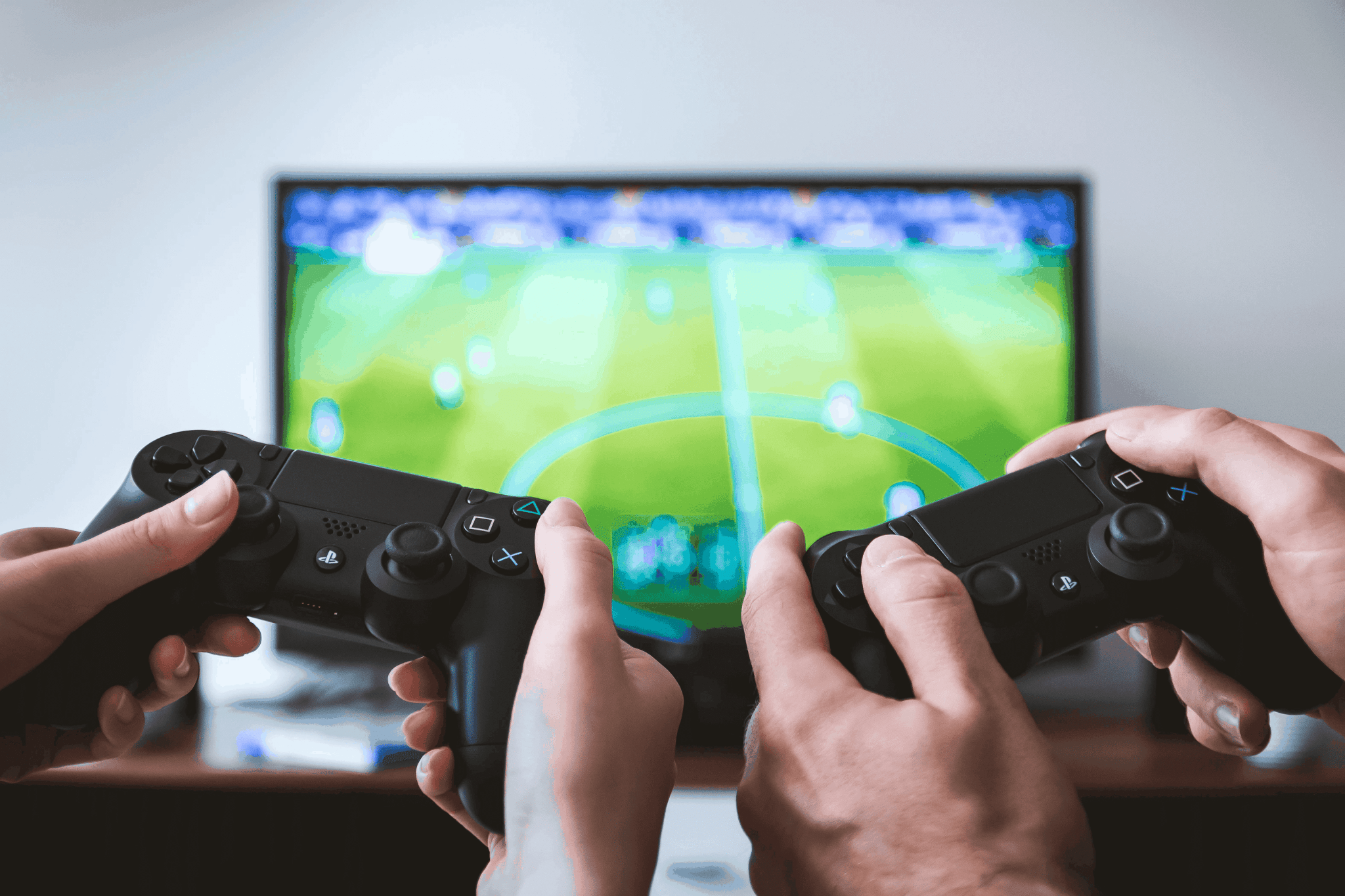 Video games can result in better social skills according to recent studies.

Video games have always had a stigma attached to them in regards to mental health. You’ll hear politicians and pundits on television saying that they “rot the brain” or that they “encourage violence.” However, throughout the years and through research and studies provided by multiple sources, video games do no such thing. They have been shown to increase cognitive thinking and hand-eye coordination. They also hone social skills through online multiplayer games. In my own personal use, I have found video games to be a pleasant distraction from the repeated racing thoughts, the mood swings, and many other symptoms that have come with being bipolar. While I can’t speak for every person who also continues to deal with mental health issues, I can attest that I have found a safe haven in video games to assist my continuing uphill battle.

As a caveat, I must state that video games should not be seen as a replacement for mental health therapy. That's because the combination of medication and speaking to a licensed therapist is still the most recommended and safest way to treat symptoms. 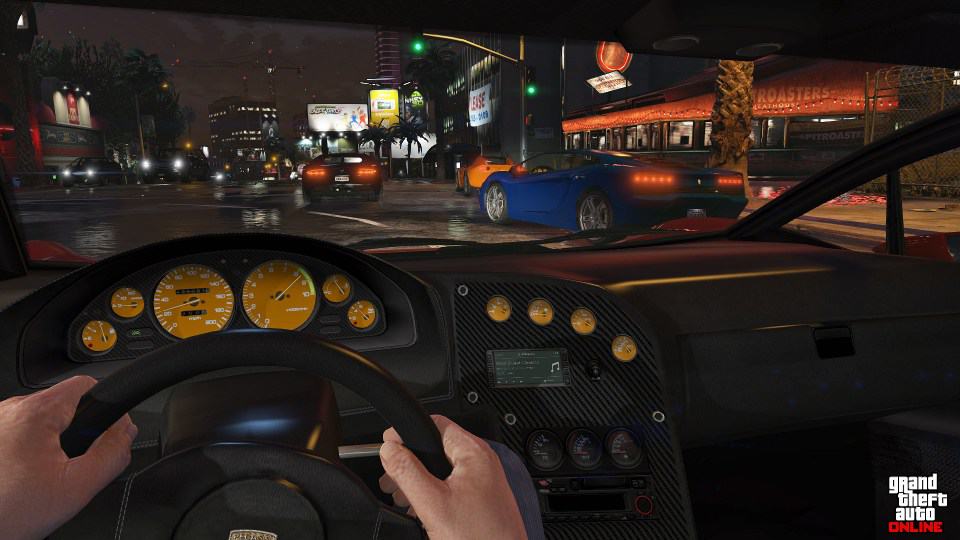 We can use video games as an assistant to these treatments. Some games may surprise you in regards to their benefits. For example, the "Grand Theft Auto" series, often cited by those with deterrent opinions as the be-all and end-all of the disproven “video games lead to violence” statement, has shown in studies that players maintain more cognitive functioning than non-gamers. It’s also shown that it can provide them the potential to be safer drivers, which may seem counterintuitive considering the gameplay. While I have fun speeding along the streets of Los Santos and attempting to land on the roof of its airport after taking a motorcycle off a ramp, the idea that I could do that in real life never crosses my mind. 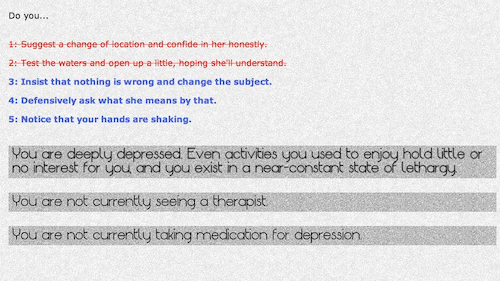 Online games like Depression Quest help those with and without symptoms gain a better understanding of depression.

With the discovery of benefits, which could be applied as part of therapy, developers are creating games that specifically deal with assisting people in coping with their individual mental health issues. One of the most popular of these games at the moment is Depression Quest. This game, presented as a classic text adventure, is free to play online. In this interactive fiction, you play as someone with depression. While dealing with the everyday tasks of common life, it aims to show others with depression that they are not alone. It also is used as a tool to educate people without depression as a means of eliminating stigmas and helping them understand what it is like to live with depression.

As I write this article, I am on the verge of being 35 years old. I enjoy video games as a means of escape from daily life. At the end of a day, I will turn on my PlayStation and turn off the rest of the world. It’s allowed me to have a better sleeping pattern. Any heightened emotions, a common symptom of being bipolar, get healthily channeled into my gameplay. It gives me the ability to focus only on the task at hand that a game will provide. I can consider myself lucky that I don’t have the most severe version of bipolar disorder (there are different levels), but I do find pleasure in knowing that video games can help others who have it far worse than myself.

"...things make sense again. You know, good and evil. Evil is evil. You stomp it out, we're good." - a veteran speaking of playing Call of Duty

In a study from 2019, video gameplay was shown to help veterans with post-traumatic stress disorder (PTSD) "optimize their use of games to support recovery." Participants in the study reported that they felt gaming helped them distract their minds from symptoms of PTSD, including suicidal thoughts or turning to drugs and alcohol for relief. The games they played were of a vast variety including sports, gambling, racing, platformers, and even first-person shooters. The gameplay gave them adaptive coping skills, mood management abilities, stress relief, and improved social skills. 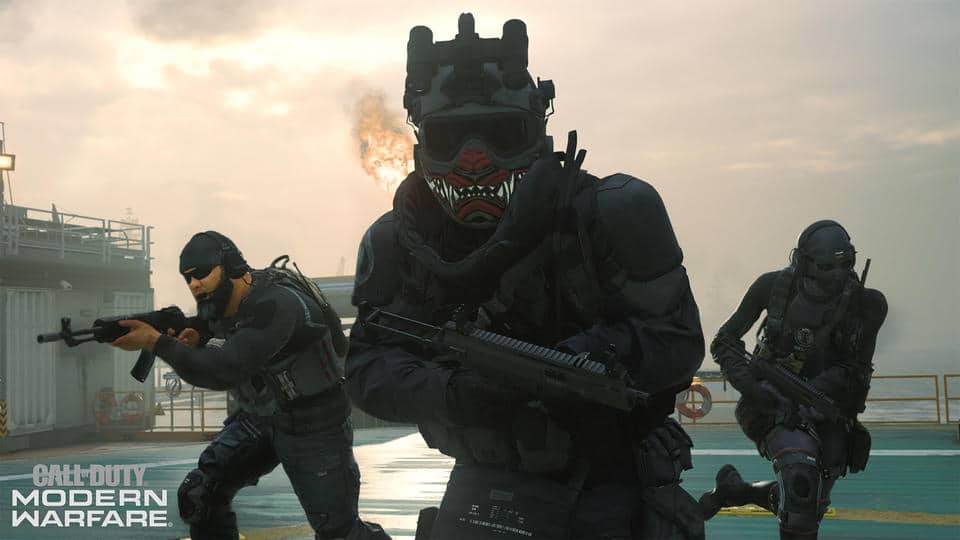 Veterans with PTSD are finding COD multiplayer to be therapeutic.

Another development observed in that study was an increase in psychological well-being, or eudaimonia. Veterans described how they were able to draw from their strengths while playing military games such as Call of Duty. According to one veteran in the sample group, "things made sense again. You know, good and evil. Evil is evil. You stomp it out, we're good."

What that formerly active soldier was describing may seem simplistic. But it actually was a coping mechanism to counteract the indecisiveness and common feeling of insecurity that comes with PTSD.

In another study conducted by the National Center for Biotechnology Information, a selected study of specific video games found that each game had its own unique individual effects on players. Internet games like online gambling, role-playing, strategy, and shooters saw an improvement of positive symptoms in schizophrenia patients. Also, Tetris helped patients with the prevention of intrusive memories from trauma.

Speaking personally, I’ve had very beneficial outcomes playing video games. I’ve developed friendships with people across the world, many of which are part of our Replayer community.

There’s nothing better than the sense of accomplishment when finally defeating a difficult level or unlocking that long-awaited achievement from hours of gameplay.

One of the most common things I’ve discovered is that I am not alone in using video games to assist me in my daily life. While not everyone may have the same struggles, there is a great sense of comradery in being involved with the gaming community. I’ve also been able to move past any stigma about whether gaming is a legitimate hobby. Gaming allows me to shut off my mind from those daily struggles.

Most importantly for me, video games have had nothing but positive outcomes. There’s nothing better than the sense of accomplishment when finally defeating a difficult level or unlocking that long-awaited achievement from hours of gameplay. While I still have days when I don’t want to get out of bed, or when I feel manic and a loss of control, I know I can count on gameplay as a way to tune out those symptoms and get immersed in a world where I can achieve anything with no one to stigmatize me.

How have video games helped you? Do you have a similar experience to mine? I'd love to hear your story in the comments.

September will be kicking off with a bang with the fall release schedule of games. There is a lot of variety getting released to boot, from little indie’s to big-budget action; we have a lot to look forward to this month. Get your pocketbooks ready! It’s about to get crazy this holiday season!
by Dan Morris | August 31, 2021 | Featured ArticlesGames 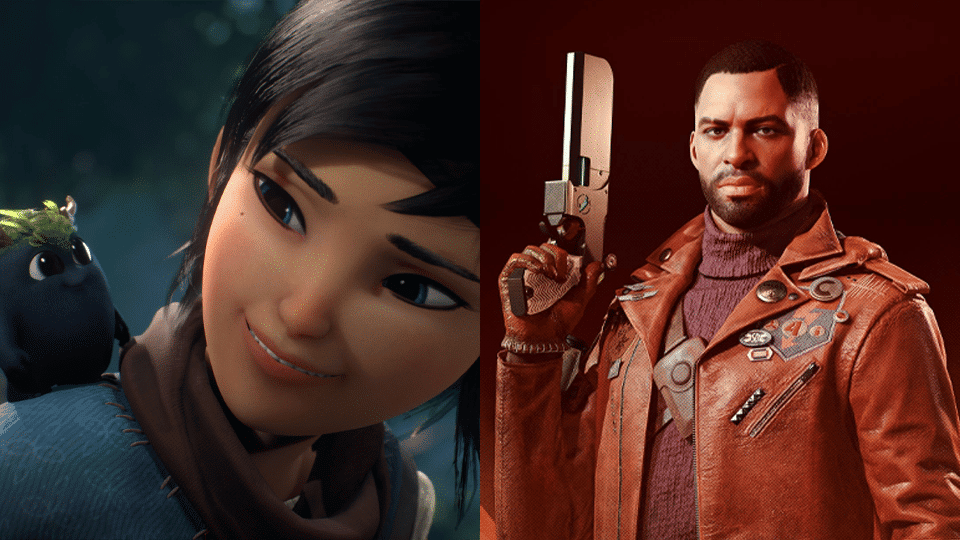 A Modern Games Review From a Time-Traveling Gamer Dude 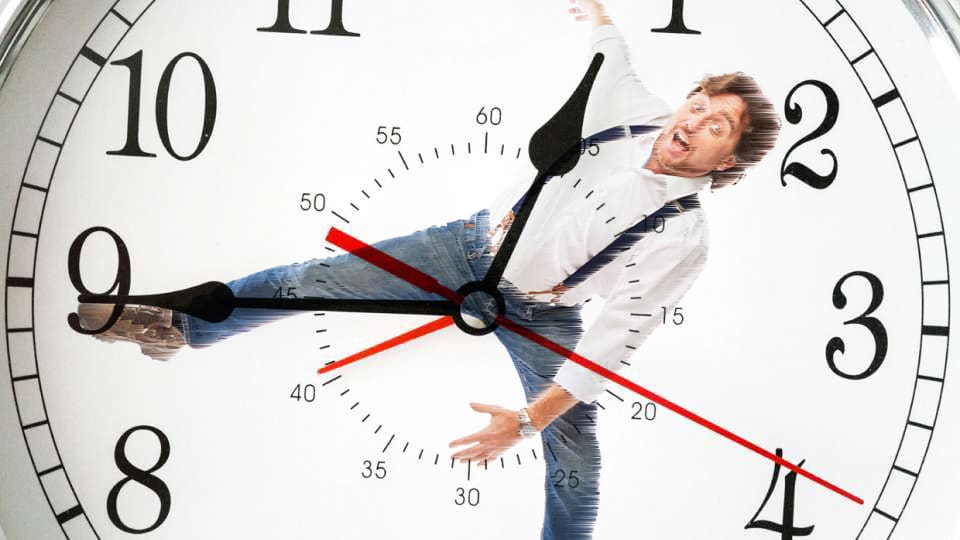