House of the Dragon Episode 9 - The Rejected Queen Rises 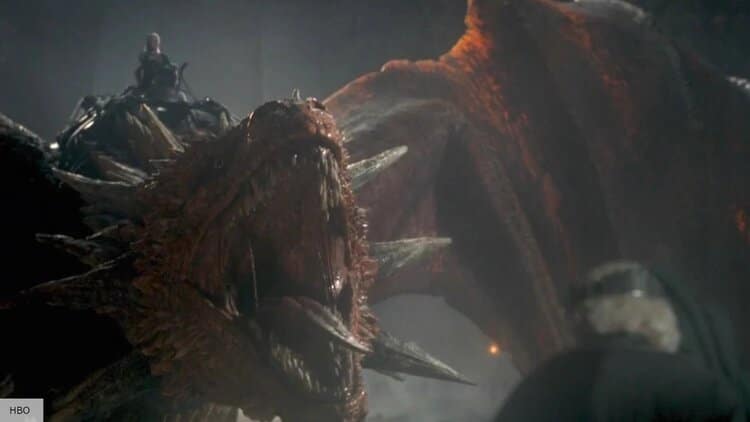 Episode 9 has come, and we have a new King of Westeros! House of The Dragon gave us its penultimate episode on Sunday and left us with questions about honor, side-eyes about former fan-favorite characters, and a fierce boss bitch. There was betrayal, misunderstanding (understatement of the century), father-daughter squabbles, and don't forget the fact that a father, husband, and brother died. Oh yeah!

Before we get too far into the episode, here's a quick reminder to catch our new show, "Decoding Dragons,"* where my talented co-host Liza Phoenix and I break down all things House of the Dragon (also available on YouTube and podcast format)! We dive deep into lore, symbolism, easter eggs, and more of Westeros and Game of Thrones. If you don't have 40 minutes to listen or watch, but you do have a few minutes to read, continue forth, my Lords and Ladies. If you don't want to get burned by spoilers, I suggest watching the ninth episode before continuing on!

* A special shout-out to Ayana who graciously filled in during my absence while I had the wedding weekend of my dreams, followed by a stay in a no-internet area (it is West Virginia, after all). Thank you, Ayana, for helping us continue our success with Decoding Dragons, and you are welcome any time to share the screen with us!!

With that, let's go ahead and dive into Episode 9, aptly named "The Green Council."

First off, there wasn't a timeline jump in this episode! It  immediately follows Episode 8, give or take a couple of hours. Following the King's death in the last episode, Episode 9 opens with Alicent's handmaiden learning about the King's passing. She then tells Alicent, who is visibly upset. Whether it was truthful or not, you can decide as an audience.

This prompts the High Council meeting that sets the precedent for the episode. The Green Council is everyone scrambling to have Aegon, Alicent and former King Viserys' first born son, ascend the throne. This comes from the *most likely not* misunderstanding of the final conversation between King Viserys and Alicent in Episode 8. He was referring to the conversation Rhaenyra had pursued with him previously in the episode about Aegon the Conqueror's prophecy, the Song of Ice and Fire. She was curious about its truthfulness. Unfortunately, it was Alicent with whom he was talking at the end of the episode, mentioning that Aegon is to be King in order to maintain peace among the realm, prior to the Long Night.

Remember, we had met Rhaenyra's son with Daemon who is also named Aegon. This is the misunderstanding of the year that is yet another tone set for the Dance of the Dragons. The Green Council is to ensure the Greens rule the Seven Kingdoms and take the throne for the one that King Viserys wished to succeed him in his dying breath. Please tell me I was not the only one whose eyes got lost in the back of their head from the intense eye roll every time this was mentioned. No?

Also during the Green Council, we quickly see those who have honor and those who are easily swayed. Lord Commander Harold Westerling stays steadfast in his honor to serve the King and throws his white cloak to the ground after being asked to go to Dragonstone and slay Rhaenyra and her family. Ser Crispy Cole (otherwise known as twat Criston) murders Lord Beesbury, the ancient Master of Coin, for maintaining his sense of honor and loyalty and not believing the mother of the boy they are trying to crown as King as she sat alone with the dying King and definitely didn't make anything up. SHARP INHALE.

Meanwhile, all this nonsense leads to the scavenger hunt of the season for the missing king-to-be. The middle of the episode contains two teams of two searching for the grand prize. Unbeknownst to many, the Hand of the King, Alicent's father, has been scheming behind the scenes with other High Council members to ensure the Prince's ascension, and this goes as far as to paying the White Worm to keep him safe.

We have Ser Crispy and the Prince's brother, one-eyed Aemond, acting on behalf of Queen Alicent, and we have Ser Erryk and Ser Arryk, united with Lord Hand. Who will win the race first? It ends up being the A-Erryk's due to the help of the Hand. It appears as if the White Worm has been helping the Hand on the side by spying on all of the comings and goings in the Red Keep… including the Queen. More on that later. It appears that Mysaria, the White Worm, hid Prince Aegon beneath the altar in the sept. Once the knight brothers find him, Ser Crispy and Aemond meet them outside, and a scuffle ensues. Ser Erryk and Ser Crispy battle as Aegon and Aemond take off in a short race. Ser Arryk is able to slip away unnoticed. Aegon clearly doesn't want the throne, thus the scramble, and we find out more on this later.

Through all of this, the followers of Rhaenyra's claim are being pulled into the Throne Room to reverse their fealty to favor Prince Aegon. They also locked Princess Rhaenys in her room to ensure she is unable to escape and let Rhaenyra know what is happening. Speaking of, the Green Council didn't even alert Rhaenyra or Daemon to the fact that their brother-in-law/father and brother/father-in-law (I'll let you figure that out) had passed away. Rhaenyra is supposed to be King Viserys' heir, which means she needs to be on her way to King's Landing to ascend the throne. However, Tywin Lannister—er, I mean—Otto Hightower has worked enough behind the scenes that that will never happen. They let King Viserys lay in bed, rotting, before the silent sisters wrapped his corpse and Alicent placed his crown on his stomach.

Lord Caswell, who had offered to help whenever Rhaenyra needed it, was caught on his way out the gate to alert Rhaenyra to what was happening, and he was hanged in the Red Keep. The Queen visits Rhaenys in her locked room and basically said, "Let me rub my nose up your butt and stroke your ego, and maybe you'll come to my side." Rhaenys says, "I'll think about it," and Alicent leaves her be.

Easter eggs: It is important to note this is NOT the Sept of Baelor that Cersei blew up in Season 6 of GoT. This is simply a sept celebrating the Gods. The Sept of Baelor is named after Baelor I Targaryen, the ninth Targaryen King to rule on the Iron Throne. He is also the 2nd son of someone currently alive in this series, but I won't spoil further than that!

The Beast Under the Boards

After Aegon has been "captured" and returned home, Alicent gathers him for his coronation. In the carriage on the way to the sept, we discover that Aegon doesn't want the throne partially because he knows his father didn't want him to have it. He questions his mother's and father's love for him due to his father's steadfast support and holding of Rhaenyra being his heir. Alicent then shows him the dagger that we know has the Song of Ice and Fire prophecy embedded into its blade. What will happen to that knowledge?

Meanwhile, Ser Arryk, who had slipped away outside the sept, snuck into Rhaenys' room and to supposedly help her escape King's Landing. While they moved through the streets, the City Watch were gathering citizens for the coronation. Amongst the shuffling and crowd, Rhaenys notices they are heading to the Dragonpit, not the Throne Room! Huzzah! Once into the Dragonpit, she is able to slip away to its depths.

The pomp and circumstance of the coronation is in full swing with Targaryen symbolism thrown onto every Hightower green cloth that can be found. We know Aegon is uncomfortable with this crowning and hesitates to kneel for it. He is given Aegon the Conqueror's crown and stands to… no applause. Ser Crispy Cole announces "King Aegon!" which starts a smattering of applause, followed by tumultuous cheers. King Aegon then realizes what he has been given and leans into the cheers, raising his sword in the air.

Upon this celebration comes the beast under the boards. Rhaenys, decked out in her riding armor on top of Meleys, her dragon, comes bursting through the floor, tossing townsfolk all over the room. She creeps up onto the Hightower/Targaryen crew, who are gathered in shock. Alicent runs in front of Aegon to protect him from dragon fire as Rhaenys bears down on her foes. As we in the audience all implore a well-placed "Dracarys!", Meleys let out a loud-but-fire-free roar. Rhaenys and Meleys then turn and leave through the closing doors, presumably headed to Dragonstone to let them know the shenanigans that have ensued.

Easter eggs: The "beast beneath the boards" is a callback to the statement made by Helaena Targaryen in Episode 8 during the "Last Supper." She mentioned it again here in Episode 9 when she became upset at her mother when asking for the truth about her father's death.

The Netflix animated feature The Witcher: Nightmare of the Wolf tells a backstory of some characters we'll meet in The Witcher Season 2 on Dec 17. Is it worth a watch? Check out this review from Stef Watson to learn more.
by Stef Watson | December 13, 2021 | Pop CultureReviewsTelevision series 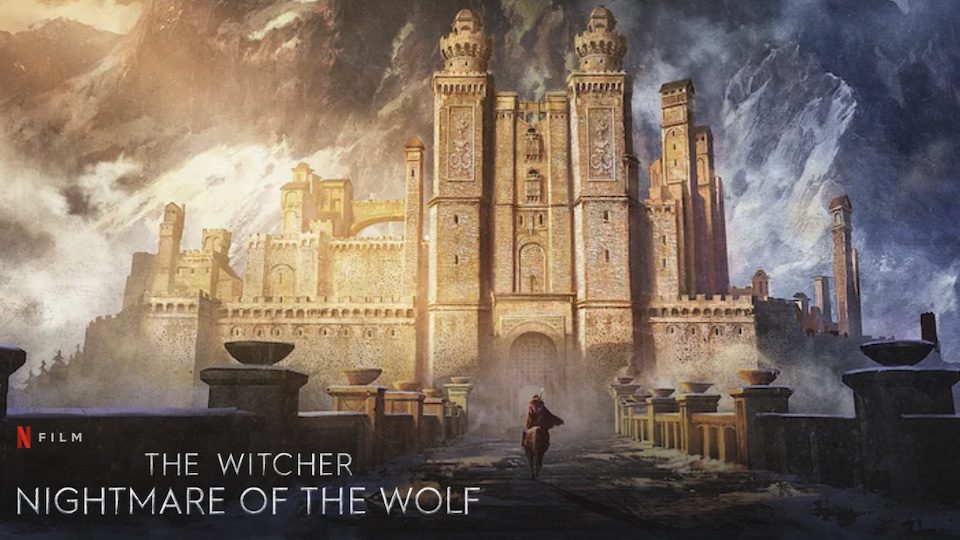