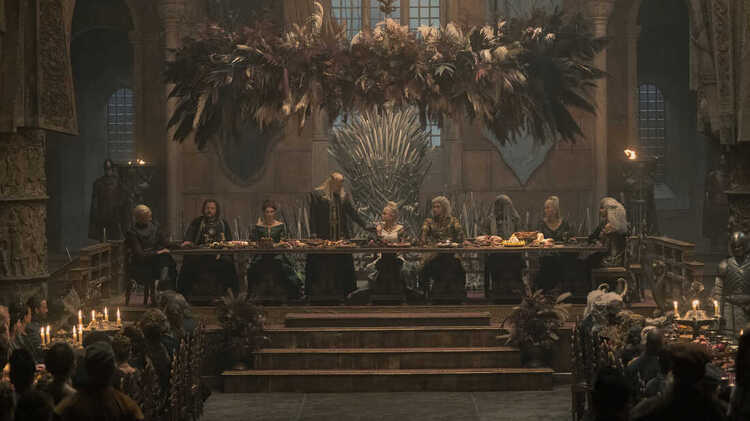 It’s wedding season, y’all! In true Game of Thrones fashion, House of the Dragon has brought us a Westerosi wedding with death, political jabs, intense conversation, elaborate hair, and dancing! This week, in Episode 5, we got a sharp costume change and daggers to a few broken hearts.

We’ll dive into the marriage shortly, but first, don't miss our new show, "Decoding Dragons," where my talented co-host Liza Phoenix and I break down all things House of the Dragon (also available on YouTube and podcast format)! We dive deep into lore, symbolism, easter eggs, and more of Westeros and the Game of Thrones universe. If you don’t have 20 minutes to listen or watch, but you do have a few minutes to read, continue forth, my Lords and Ladies. If you don’t want to get burned by spoilers, I suggest watching up through Episode 5 before continuing on!

Ok, let’s go ahead and get into what happened in Episode 5, aptly named “We Light the Way.”

For the first time in the series, we got an episode set at the time immediately following the previous episode! There was no time jump to decipher with dialogue or hair changes. This means the events from Episode 4 are still very fresh in everyone’s mind. Alicent is certain that her "BFF" Rhaenyra told her the truth, and her father, Otto Hightower, is fired from his position as King's Hand because of it. On his way out, Otto continues sewing the divide between Alicent and Rhaenyra by stating the hard truth of the situation: when it comes to the succession, it will be Rhaenyra vs. Alicent’s children and Westerosi tradition. Between her father and the other twat in her ear by name of Larys Strong, Alicent becomes hell-bent on discovering what actually happened between Rhaenyra and Daemon. We saw how disgusted she was in the last episode by the Targaryen tradition of incestual marriage, and the thought of Rhaenyra not only participating, but also then lying about it sends her on a mission for the truth. More on this in a minute.

We get a mini-movie at the beginning of the episode introducing an incredibly likable and capable female character. We find out this is Daemon’s wife, the Lady Royce, whom he has had so many wonderful things to say about (sarcasm intended). We learn that the disdain is obviously mutual when her response to his sketchy appearance in the Vale is simply, “Husband?” Unfortunately, she meets her classic Game of Thrones end as quickly as she’s introduced in a "hunting accident." In reality, Daemon spooks her horse, which throws her off and clearly breaks some bones. Immobilized, she then gets a final jab in as she’s lying broken on the ground, which triggers him to finish the job with a rock to the head. We don’t see him apply the rock, though, so that part is left to our imaginations.

We see Driftmark for the first time on screen in the Game of Thrones universe! Driftmark is an island next to Dragonstone, but is a little closer inland to Westeros (see the map). It is the home of Corlys Velaryon and his family. The castle, known as High Tide, is a beautiful cliff-perched structure, similar to Dragonstone. Rhaenyra, King Viserys, the new Hand (Ser Lyonel Strong), and Ser Criston Cole, on Kingsguard duty, sail to Driftmark to meet with Lord Corlys. Viserys wants to propose the marriage between Rhaenyra and Corlys' son Laenor. Rhaenyra agreed to the betrothal in Episode 4 after the King found out about her extracurricular activities with Daemon.

Corlys greets the king in the throne room in High Tide after snubbing him upon his initial arrival to the island (not meeting him at either the docks or castle gate). Inside the throne room, we see a beautiful collection of trinkets and treasures that Corlys has gathered on his voyages and journeys. He’s basically Game of Thrones' Nathan Drake. After a small amount of deliberation over the terms of the arranged marriage, the betrothal becomes official. In a sweet moment at the beach, Rhaenyra and Laenor are walking together, visiting with one another. Since they are technically cousins, they grew up together, and have a lot of familiarity. Their conversation alludes to preferences in dining tastes, leading us to discover that Laenor would prefer to keep his long-time best friend Joffrey Lonmouth as his paramour. (This is a good Joffrey, I promise!) However, as we know from Renly Baratheon’s experience 170 years later, political marriages do not mean happy marriages. Rhaenyra and Laenor come to a modern and mature agreement that yes, they will marry, but they can "dine elsewhere" when needed. Capiche? Capiche.

The downfall of Ser Criston Cole

You may be reading that header thinking, “His downfall was last episode when he broke his oath and slept with the princess and maybe got her pregnant.” Well, I don’t disagree. However, on the journey back to King’s Landing from Driftmark, a notably unarmored Criston approaches Rhaenyra with the suggestion to run away to Essos and be free. Free of the Crown’s responsibilities, free of the morally gray decisions causing their life to be full of uncertainty, and free of arranged marriages. Rhaenyra appears to be conflicted with the question at first, but then crushes his soul with, “I am the Crown. So, no.” She continues to challenge his honor and tells him that yes, she will be married, but he can still make her happy on the side. He takes this as an insult, comparing himself to a whore, and leaves the conversation. He looks like he's about to snap, but more on that later.

Guess Who or Clue?

Once everyone is home in King’s Landing, wedding preparations start, and Alicent is on her mission to get to the bottom of the incestual tea cup. She questions Ser Criston about Rhaenyra's sexual indulgence without pointing any fingers at any particular lover. Criston then breaks under the ethereal pressure and admits to tarnishing Rhaenyra’s reputation. Since he is a sworn knight of the Kingsguard, this is a sin punishable by torture worse than death. This was not the information Alicent thought she was seeking, but it sufficed in sealing the doom of a friendship that once was. (Yet somehow she's not realizing that she was the initial downfall of said friendship by not telling Rhaenyra she was gonna marry her dad, then doing it anyway, but that’s neither here nor there. *sips tea*)

Oh, the wedding. There’s a lot to unpack here, so let’s get to it. It’s the first of seven nights of celebration as proclaimed by the King to give his daughter a dream wedding. Powerful families walk into the throne room dinner party, each announced by Ser Harrold Westerling (our very own Graham McTavish). It’s a scene of feast, opulence, dramatic hair, detailed dresses, and surprises. It is a royal wedding in Westeros, after all.

The first fun surprise is Daemon strutting his way back into the Red Keep, interrupting the King’s welcome speech and accompanied by silence. This is his second return since being banished… for the second time. Once everyone recovered from that set of balls walking in, the next surprise is Queen Alicent walking into the festivities in the greenest dress fabric can green. As the Strong brothers clarified, the the flame of the lighthouse in Oldtown burns green when House Hightower calls their banners. Gauntlet. Thrown. The venom flows when she greets Rhaenyra with a “congratulations, step-daughter.”

The next surprise comes in the form of an interesting conversation between Joffrey Lonmouth and Ser Criston. Joffrey stealthily slips over to Ser Criston and proposes a private agreement to keep their lovers safe (remember he is Laenor’s secret love) and still able to maintain their happiness. There is more to this conversation than is shown on-screen, and while that is happening, Rhaenyra and Daemon have an intense moment on the dance floor. King Viserys is finally able to see the truth of the matter and sees their chemistry through the crowd. Rhaenyra challenges Dameon to take her away and wed her on Dragonstone. Through all of this mess, a scuffle ensues in the crowd, and it's hard to see exactly what's happening as people cry out and get shoved about on the crowded dance floor. Then we see it: it's the Criston snap. The camera settles on Ser Criston beating the shit out of Joffrey, essentially smashing his head like a meat cleaver. Laenor is distraught, and the festivities conclude.

Rhaenyra and Laenor then get wed in the now empty throne room, seemingly that same evening given their clothes and the abandoned dinner tables. It's a much more subdued ceremony without all the pomp and circumstance. As the couple completes their vows, the King collapses from his illness, which we have seen throughout the episodes. He is getting worse, not better. Cut to Ser Criston removing his armor in the Godswood and baring his belly with a dagger in his hand, ready to end his own life. In swoops Alicent just in time to save him from himself, and we now have the beginning stages of the factions to come!

Easter Eggs: The vows Laenor and Rhaenyra share in the ceremony are not traditional Westerosi vows, and that's a call back to Jon Snow and Ygritte in GoT with the “I am yours, and you are mine…” Also, remember Oldtown being where Samwell Tarly goes to learn how to be a maester during GoT. That is where the Hightowers reside.

This episode was the second shortest in run time across the first five, but there is so much to unpack! What do you think is going to happen in the next episode? Do you have any questions about the show or lore? Leave them in the comments! Don’t forget to listen to or watch Decoding Dragons and participate in the audience questions!

While action franchises are taking over the big screen, book culture is starting to rule TV. Liza lists book-based shows to keep an eye on.
by Lizabeth Phoenix | December 1, 2022 | Books & ComicsTelevision series

Two Point Studios has leveled up the sim genre with two games that appeal to both management sim and creative sim players. Kim shares why you should check them out!
by Kim Payne | October 9, 2022 | GamesReviews