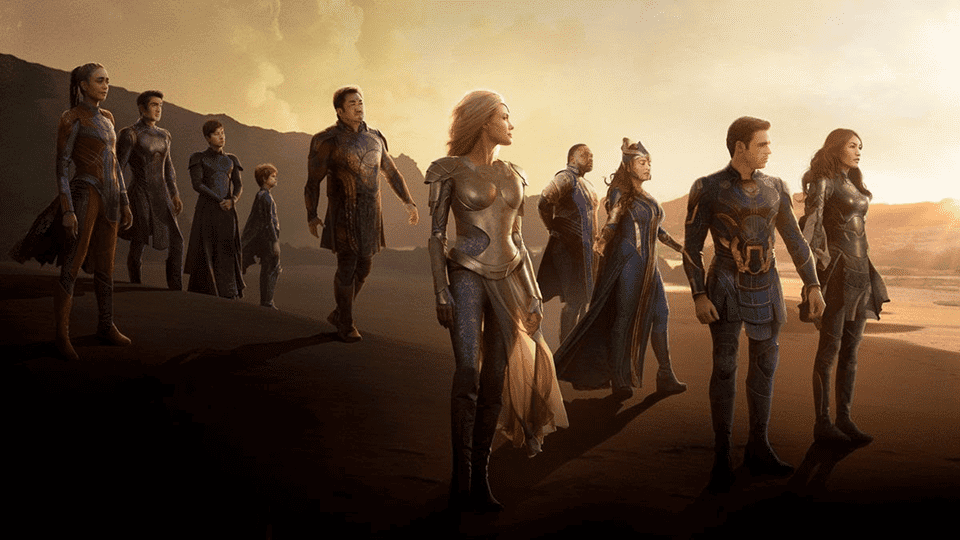 WARNING! THIS IS NOT A SPOILER-FREE REVIEW FOR MARVEL’S ETERNALS.

Guardians of the Galaxy? Who the hell are they? Remember the puzzled looks on people’s faces who hadn’t read the comics, or better yet, even those who did? Guardians became a success, with the third installment already on its way. Since then, these characters have been in several MCU films and even had their own video games. I was among the few who actually knew who this bunch of antiheroes were before James Gunn’s movie came out because I'm a weirdo and read the obscure stuff.

Years passed, more heroes arrived, and I thought there were no more surprises waiting for this Marvel nerd. Then the announcement arrived: the Eternals will be joining the MCU! The question immediately came: Who?

I pride myself in reading many Marvel comics, but these guys weren’t even on my radar. I quickly fixed that by getting my hands on some of the much-needed comic books. It blew me away. It was very different from what I was used to from Marvel, and I absolutely loved it. Very quickly, the Eternals ended up on my most anticipated list. I was most excited about the arrival of Angelina Jolie and Ma Dong-Seok (Don Lee) to the MCU. I’ve been a huge fan of Angelina for many years. I love her movies and everything she does for others. Ma Dong-Seok became an essential part of my movie life after Train to Busan and my massive need afterward to watch more of the things he was in.

I was not disappointed.

By the time the premiere day came, my anticipation and anger were boiling. Why were you angry, Lily? Well…the rotten score on Rotten Tomatoes. In this case, I was utterly baffled by the score as no other Marvel movie has scored so poorly, and I was glued to the screen from beginning to end. Since Captain America: Winter Soldier, I haven’t been as invested in any Marvel titles’. So I personally don’t understand the score

Let’s break down the movie’s basic plot because that’s why we’re here. Right?

A long time ago, The Eternals were sent to Earth to fight the Deviants. Still, they were not allowed to interfere with anything unless it included these monster-like creatures. Phastos (Brian Tyree Henry) could have easily helped civilizations evolve because he could create anything, and Druig (Barry Keoghan) could have stopped major wars simply by using his power to control people’s minds. But an order is an order, and thanks to their leader, Ajak (Salma Hayek), they are doing what they were ordered to do. All while being unaware of the actual truth behind why they were sent to Earth in the first place and who they really are.

After defeating the last Deviant, they go their separate ways to experience what the world offers. Some find new loves like Sersi (Gemma Chan). In contrast, others learn the meaning of true friendship like Gilgamesh (Don Lee) and Thena (Angelina Jolie), or simply enjoy life in the spotlight like Kingo (Kumail Nanjiani). Their ultimate reunion is somewhat bittersweet as the Deviants make their big comeback, and the truth starts to reveal itself.

Ajak is dead, and the weight of leading the Eternals falls on Sersi’s shoulders, the one who loved humanity from the beginning. When Sersi has to face Arishem, the Celestial being, we find out his plans for Earth. We learn how their race is born as the planets and their civilization grow and evolve. The being born inside Earth after humans have progressed far enough is Tiamut. The Eternals must stop to save the world as the arrival of the Celestial means the destruction of the planet.

If the term ‘Celestial’ sounds familiar, it is because we already met one of them in the MCU. Ego The Living Planet (Kurt Russell), was Star-Lord’s (Chris Pratt) father. Outside of the MCU, the Phoenix Force that Jean Grey uses also counts as one, and Apocalypse was a Celestial being. So it is definitely not the first time we meet these all-powerful beings, but it is the first time we are getting a good look inside their story and who they are.

The other big reveal is that the Eternals are actually advanced robots designed by the Celestials; their memories get wiped after every successful mission on the different planets.

These things are all part of a more profound MCU lore, and although they were always part of it, I have to admit that I never thought it would appear on the big screen. The fact that they introduced Ego should have been a giveaway.

Eternals is the first movie on the MCU list with a poor rotten tomato score…in my opinion, it shouldn’t be rotten. I read reviews where they said it was confusing because it played out through two timelines. I don’t know what critics were watching, but it definitely wasn’t Eternals. For me, there was a clear and very understandable separation between present and past. I thought it made perfect sense why Chloé Zhao wanted to jump between the two timelines. It made it much easier to understand who these people we were being introduced to were, their purpose, and their view on life itself.

Eternals deals with a lot of very critical issues.

It dares to ask questions about life and death, the right or wrong thing to do. The big dilemma of Eternals comes as they find out about their true purpose: they had to protect civilizations so the birth of Tiamut could be possible. It was never about protecting the people of Earth; they were only part of a bigger plan. So the question comes from Sersi: is the birth of one being worth sacrificing all those people’s lives, the ones they were sent to protect?

Even though the “villains” of the story are the Deviants, once the actual plan is revealed, one can’t help but wonder. The Deviants - after all - were also just pawns in the hands of the Celestials.

I absolutely adored Chloé Zhao’s beautiful directing style. She took the time to get to know these characters. Although it was our first time meeting them, it felt like we had always known them.

Eternals introduced a beautifully diverse cast, something that we can just never get enough of.

Of course, just like every movie, this one is not without fault. The introduction of the Eternals this late in the Marvel game brings up a lot of questions. Why didn’t they help when Thanos came? This was obviously answered by their directive. But it definitely opens up even bigger questions about the state of the Universe. How did no one notice that the Celestials have been destroying planets to give birth to their next in line? How come Ego could roam freely without intervention from one of his brothers? He must have known that Earth was a birthing ground too, so how come he tried to take it over? And so on and so on…

I saw many people poking holes in the plot on Twitter. As the MCU expands, I believe that even more of these questions will come up, which initially is not a bad thing if they can manage it correctly. This will be something that only time and more movies will tell.

Altogether, it is tough to find balance in creating something entirely new while staying true to what fans grew fond of, especially these days. Some will say that the MCU movies follow the same formula, and therefore, they are never changing or evolving. In Eternals, the “usual” structure is basically dropped entirely. Many who reviewed it wrote things like: “it doesn’t feel like a Marvel movie” or “what was that ending? There was no big battle?”

There was no big battle; their fight - first and foremost - was internal, something that they had to sort out between themselves. It was incredibly effective and powerful nonetheless. Fighting against one of your friends (Ikaris) is a more significant challenge than anything else. While watching Makkari and Phastos kick Ikaris’ butt, all I could think about was the thing Dumbledore said to Neville Longbottom in the first Harry Potter movie:

It was an absolute joy to watch this film; I felt like a child again. The sets were stunning, the bond they managed to build between the characters was powerful and meaningful.

I can’t close out this review without saying that, as I predicted, Angelina Jolie and Don Lee’s team was my absolute favorite thing. I watched many interviews with the cast. As Angelina points out, their friendship shows how much we need a friendship like theirs on screen; it’s pure, honest, and authentic. It caused me to have a massive breakdown when Gilgamesh (Don Lee) sacrificed himself for Thena (Angelina Jolie).

I encourage you to go and see it and decide for yourself. Lately, we as a society have become incredibly dependent on what others say about entertainment around us. I am at fault in this too. I missed out on many things in the cinema because they scored so poorly that I didn’t want to risk it. Then to discover later that I actually really like them. Sure, there are absolutely times when the film is simply rubbish, but it’s often better to decide for yourself. We all have such different tastes, which is absolutely fine in the long run. Eternals was released on Disney plus on January 12th.
I loved Eternals, and I hope a lot of you out there loved it too. Will you be watching when it releases on Disney?

Michelle's review series continues tackling the controversial film Don't Worry Darling. Will it take a few bottoms-up to get through the film, or will Michelle be wanting more movie and wine?!
by Michelle Holstine | December 7, 2022 | MoviesReviews 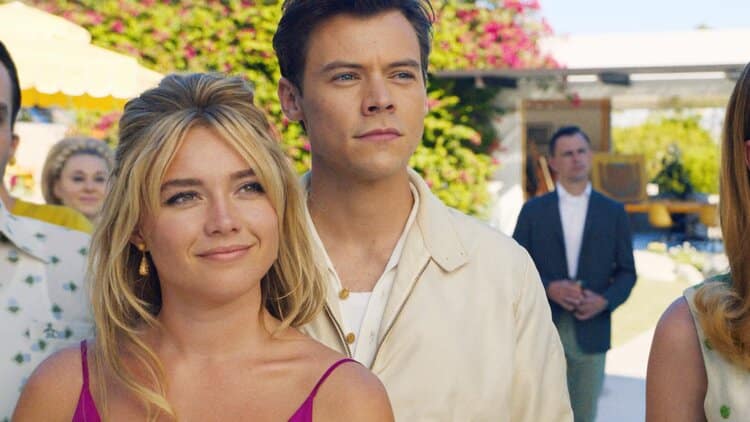 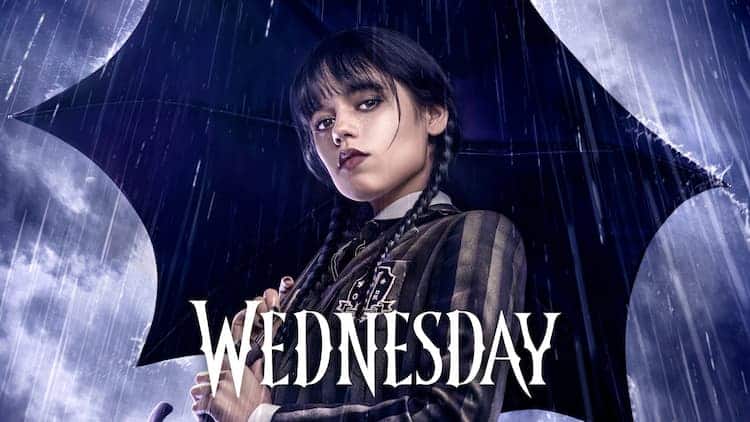