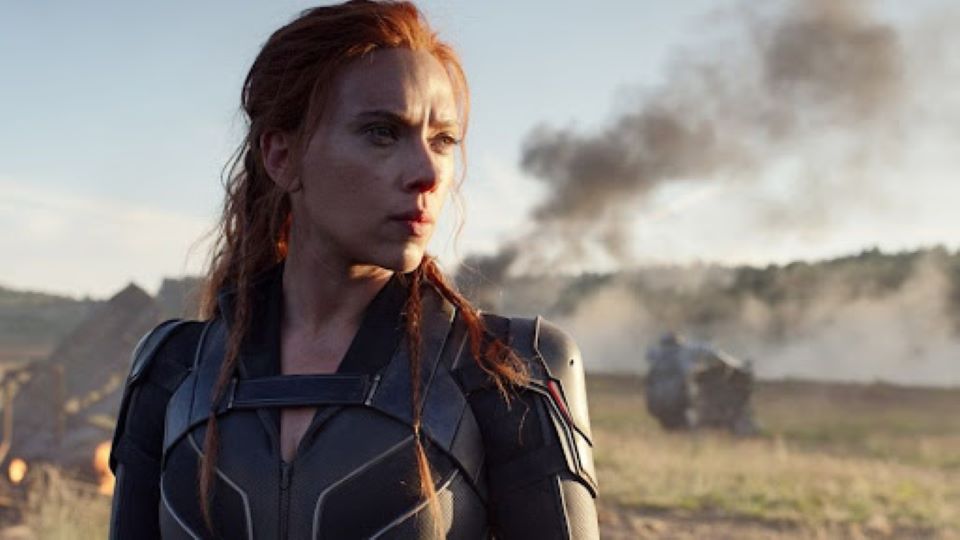 I just came home from the cinema, and my head is buzzing with many thoughts about Marvel’s return to the big screen. But, before I get into it, I will have to put a big red: SPOILER WARNING. You’ve been warned.

The MCU had been going strong since WandaVision graced our TV screens, but we had to wait a tiny bit longer for the return of the movies. When they first postponed Black Widow, I don’t think any of us thought that it would end up getting pushed back till the summer of 2021. Yet, here we are.

There was a lot of speculation about what Black Widow would be about and where it would be on the timeline of events, but I don’t believe anyone guessed correctly I certainly didn’t. My theory was that Natasha is closed inside the Soul Stone and she would somehow relive her memories, but slowly she would realize what’s been going on. I was completely off track, which led to the very sad realization that this indeed was the last appearance of Scarlett Johansson in the MCU. This realization is due to the fact that Black Widow takes place between the events of Civil War and Infinity War when Natasha is on the run.

At the beginning of the movie, we get a look into Natasha’s childhood with her father, mother, and little sister in Ohio. It sure seems idyllic until the eagle-eyed Marvel fans (aka me for example) start to chuckle. Natasha didn’t know who her parents were, and that is made clear throughout the MCU timeline. She is in fact very surprised when Red Skull reveals her father’s name to her in Endgame because she didn’t even know that. Therefore, we can already tell that something isn’t quite right in the scenario, even though it is nice to see a happy moment from our beloved Black Widow’s childhood, even if we soon find out that it was all an illusion. The people she treated as family betrayed her very early on and she and her little sister Yelena (Florence Pugh) are tossed back into the Red Room where the Widow training is happening.

The movie fast forwards 21 years as Natasha is on the run from Thaddeus Ross (William Hurt) after the events of Civil War. This is where we also meet Yelena again as she is on a mission and as she overpowers the target, a red substance is thrown at her. But instead of turning into a mindless monster, (which is something one could expect in a situation like this), her head actually clears up and it turns out that ever since Natasha escaped they have used very successful mind-controlling chemicals on the next generation of Widows. Yelena gets rid of the tracking device that is inside her and soon the samples of the ‘cure’ (let’s call it that) end up in Natasha’s hands. 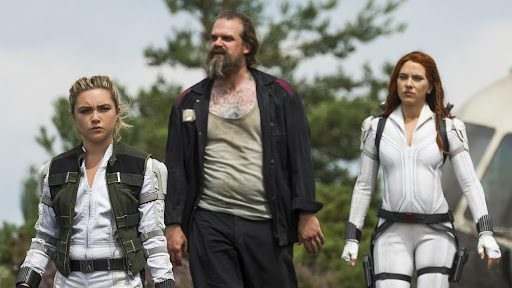 That’s the catalyst for the movie. It is so much more than just a superhero/action film from that point. Natasha has to deal with a lot. She goes from one broken family (The Avengers) back to another one only to find out that the famous Budapest events (referenced by her and Clint a lot) were all for nothing. It turns out that she had tried to kill the leader of the Red Room and the Widow program Dreykov (Ray Winstone) and her arch-nemesis had actually survived.

Now before I get on with the review, I want to share a bit of a fun story that happened at this big reveal. I am from Hungary, and we've been waiting to find out what role our capital: Budapest, would play in the MCU since it was first mentioned in Avengers (2012). There was a line in the movie referring to events that probably aren’t funny to an international crowd, but the whole cinema here laughed out loud when it was said. Natasha says that after the bombing, which was supposed to take out Dreykov, she and Clint had to fight through the Hungarian Commando. We all laughed at this because TEK (the previously referred to Commandos) has quite a bad reputation here in Hungary because in a lot of cases they are deemed to be incompetent. So Natasha saying that they had to fight through them like it was a big deal made over 90 people laugh in the cinema even though I am sure they didn’t think of it as a source for laughter.

Ok back to the review.

Once Natasha realizes that what she did to close down her past and save other girls from the same fate was unsuccessful, a much darker thing comes back to haunt her. As it turns out, the day they tried to kill Dreykov they also killed his daughter because as she put it, “There was no other way.” It’s clear very early on that this decision never left Natasha’s mind, and that she has struggled to come to terms with what she did. To find forgiveness. It sits heavily on the film the same way their “parents” betrayals do. 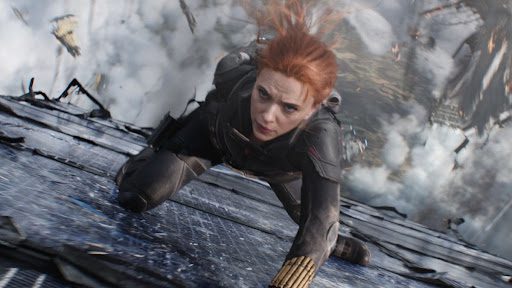 They soon figure out that in order to find the Red Room they have to get the help of their fake parents. First, they have to save Alexei (David Harbour) from prison - he was betrayed and put behind bars by Dreykov - and get to Melina (Rachel Weisz) who still works for the Red Room and is responsible for the chemical compound that controls the widows. Once they arrive at Melina’s home we get to witness one of the most important scenes in the movie as the two girls’ trauma catches up with them. I have to admit that I was unsure about Florence Pugh’s casting as Yelena up until this moment in the movie. Here she proved it once and for all that she is pretty great. It broke my heart a little as it also showed us that Natasha’s past has been darker than we could have imagined. Yelena represented the child who was unaware that nothing she saw or experienced during their three years as a “family” was true, while Natasha was old enough to know that it was nothing more than an act. Both of their hurt was real and deep-cutting.

I really liked the more quiet parts of Black Widow. It once and for all proved that one of the original six deserved to have her own film and we still had a lot to learn about her. She is smart, strong, brave, and everything that’s worth looking up to. It definitely gave me more strength to keep going on my journey and do everything I can to one day be part of the MCU.

I know a lot of people complained about Taskmaster being a letdown and while I do understand them, I do not agree with them. The tragedy of this character, and showing the true evil of the story is simply fantastic. Taskmaster is none other than Antonia Dreykov (Olga Kurylenko) aka the daughter of Dreykov, who was used by her own father the same way other girls were. He was controlling the mind of his daughter without any remorse. He even has the audacity to thank Natasha for giving him one of his greatest weapons. 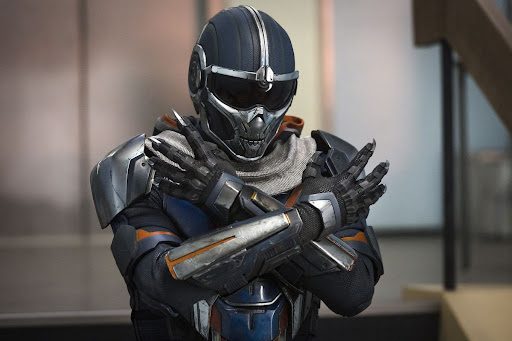 The movie's conclusion is amazing. Natasha not only finds forgiveness for what she did, but she also realizes that there’s still hope for her and her other family. They set Yelena up as our next Black Widow flawlessly and Natasha shows up at the end of the movie the way she looked in Infinity War, which gives a bittersweet touch to the whole story.

I was ugly crying once the realization fully set in that this was our last time with Scarlett. She has been such a highlight of this Universe and she was an example for girls to look up to. She has been and always will be an inspiration.

And the reason I will forgive Black Widow for coming out this “late” in the game lies in the end credit scene.

Yelena goes to Natasha’s grave (with the dog she mentioned she always wanted) and that’s when FREAKING VALENTINA (Julia Louis-Dreyfus) to whom we were introduced in The Falcon and The Winter Soldier shows up to give Yelena her next target. It is none other than the murderer of her sister: Clint Barton aka Hawkeye. Now, my theory with this big-ass surprise, in the end, is that we will meet Yelena again sooner than we thought in the upcoming Hawkeye series. I mean, it would make sense, but I also know that there’s no point in creating theories when it comes to Marvel because they like to mess with us a little. 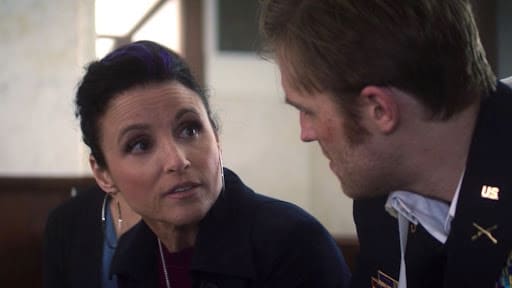 Julia Louis-Dreyfus in The Falcon And The Winter Soldier

All in all, Black Widow was a perfect entry in the MCU. Sure, we could have gotten it sooner, but to be honest I kind of don’t mind getting it like this. They did a wonderful job with tying the knots together,  and Scarlett’s last appearance couldn’t have been any better, even if it was bittersweet in the end. I sure will miss her.

I am sending my therapy bill.

What did you think of the movie? Leave a comment below. 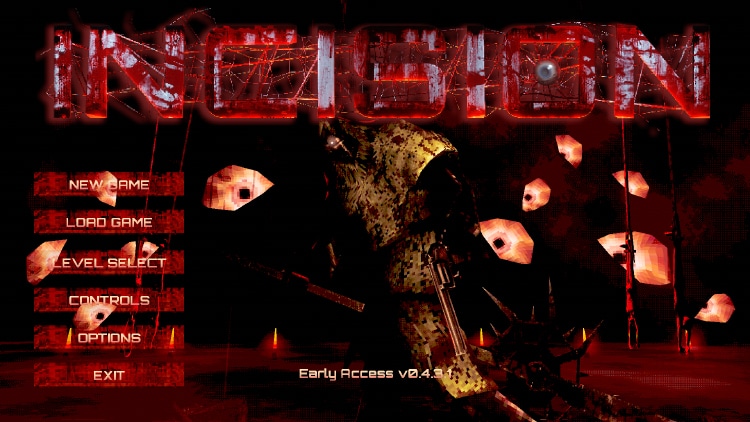 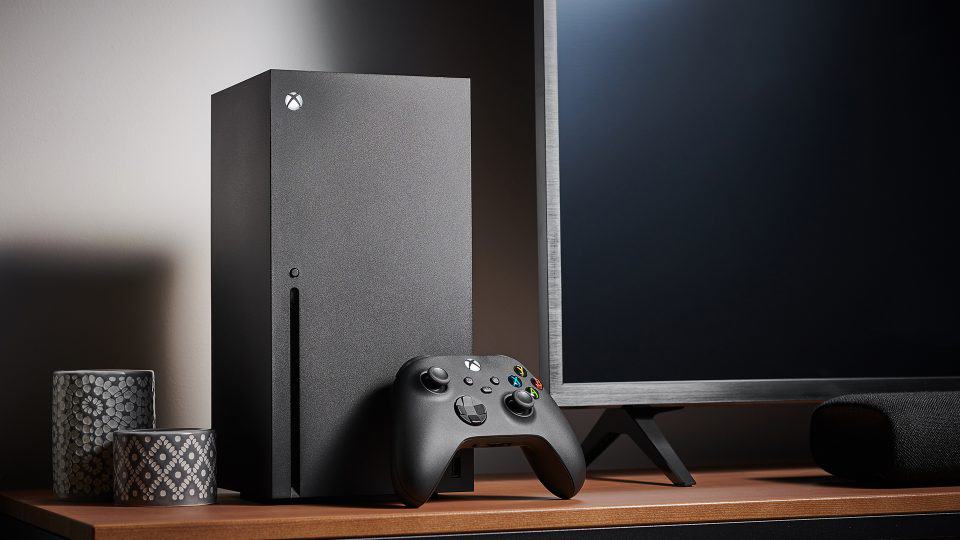